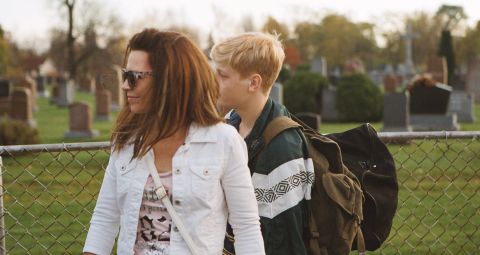 Exhilarating and exhausting in equal measure – a decent approximation of how the characters feel – Mommy puts us through every setting on the emotional wringer.

We need to talk about Steve.

Dazzling in places, infuriating in others, the fifth feature by French-Canadian writer/director Xavier Dolan (Tom At The Farm) is not exclusively a love-it-or-hate-it proposition – even its admirers will have moments when they can’t stand to watch.

A psychotic toddler in a teenager’s body, Steve is violent, rude and sexually inappropriate. Dolan makes no excuses for him, unleashing him upon us (and Die) without explanation. It’s a risky ploy – it’s very difficult to empathise with a character who spits the n-word at a cab driver and alternately attacks/fondles his own mother – but it forces us, like Die, to take Steve as he is, even as we fear what he’ll do next, and gradually we begin to see how things look from his side.

In counterpoint, Kyla has a crippling stutter; she can’t get her words out, while he can’t keep them in. The scene in which Steve pushes her too far, and she pushes back, is one of many powerhouse moments, and beautifully acted by Clément.

Scattered among the screaming matches are languid sections showing the characters bonding – or bicycling – to an AOR soundtrack. These exist only to break up the intensity of Steve and Die’s home life, an intensity increased by the unusually slim 1:1 aspect ratio that pens the characters into a selfie-without-end.

Along with some awkward subtitling, this stylistic decision makes proceedings even harder to watch, and it’s only when Steve’s skateboarding that the film – literally – opens up, the frame expanding with his horizons. These moments may feel like clichés in a film that otherwise refutes them, but they’re also a blessed relief.

Exhilarating and exhausting in equal measure – a decent approximation of how the characters feel – Mommy puts us through every setting on the emotional wringer.