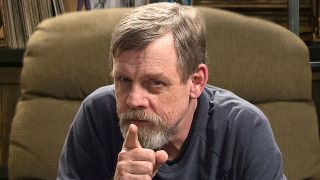 Gathering dust on any fan’s shelf are a ton of action figures, but it’s unlikely that you’ll see your own mirror image looking down on you. Unless you’re Mark Hamill, that is. We’re not talking about any Luke Skywalker figure either - it’s one of the actor himself.

SFX magazine interviewed the actor about his new show Pop Culture Quest when he revealed that he was given a taste of what it’s like to be a hunk of moulded plastic. “They did a full-body scan”, he enthused, “and the detail! I mean they had my jeans right, they had the t-shirt right, they gave me the hat”. If you look really closely, in the pocket there’s a teeny-tiny Joker action figure - in scale! It’s so tiny, it’s like the size of a fingernail”.

Hamill is angling to get it put on the set of his show, so those of you with eagle eyes might be able to spot it if you squint a bit, but that will be your only chance to see it as it’s a strictly one-off figurine for the man himself. If you’ve a 3D printer handy you can always try and create your own miniature Hamill, or, if you’re feeling brave, create your very own mini-me.

Mark Hamill's Pop Culture Quest is currently streaming on Comic-conHQ.com with the last episode going out today. For more sci-fi interviews, features, and reviews, pick up a copy of the latest SFX magazine or subscribe so you never miss an issue.