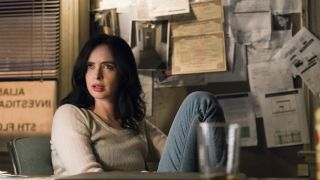 Jessica Jones Season 2 arrives on Netflix on March 8, and it feels like we've never needed our favorite snarky survivor more. In a new interview with SFX, show star Krysten Ritter spoke about the deep connection she has to the fans. "It’s been completely life-changing," she says.

"People often come up to me and say they feel very deeply personally connected to Jessica," says Ritter. "We live in a supernatural world but our show is very grounded, so you can play with real themes and make them so much bigger." For all her superpowers, the character of Jones has faced bereavement, abuse, and violence.

"Some people have been very emotional with me. They were survivors themselves, and felt like they saw themselves on screen. They loved that Jessica didn’t let her past traumas deﬁne her. They loved that she wins at the end, even though it’s a small victory, even though she doesn’t know what the next day will bring. She’s still putting one foot in front of the other, and a lot of people connected with that storyline. Sometimes I’ll get tears from people, and of course you’re crying too."

Ritter also spoke about the importance of having such a strong female cast and crew. All of season 2's episodes are directed by women. "We’re trying to empower a lot of women and give opportunities to people who maybe weren’t getting them elsewhere," explains Ritter. "It feels very much a part of our world on this show. We have amazing women in the crew, our costume designer, we even have some female grips and female ACs in the camera department."

Issue 298 of SFX is on sale now, and you can check out a preview here.

We're also available on Google Play and Zinio, and most digital formats give you a 30-day free trial, so you can try before you buy! For Apple users: click the link and you’ll be directed to SFX's page in the App Store – once there, install the SFX app, or – if you’ve done that already – hit Open to be taken to the SFX storefront.