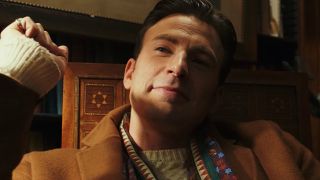 The act? Announcing Knives Out 2. The culprit? Lionsgate CEO Jon Feltheimer. The motive? Lots more bank at the box office. Probably. Most importantly, though, we’re definitely getting the return of Daniel Craig’s Benoit Blanc for another whodunit in the near future. Maybe he’ll finally find a donut hole within a donut hole of a case that even he can’t crack.

The news comes from an earnings call (via Deadline) where Feltheimer explicitly describes Knives Out as a “Lionsgate franchise,” though no further word was given about development, casting, or a release date, which is understandable at this very early stage.

Director Rian Johnson – who will be waiting with bated breath at this weekend’s Academy Awards after being nominated for Best Original Screenplay – recently outlined his plans for a Knives Out sequel, saying he intends to work on the project within the next year and that Daniel Craig is fully on board. “Daniel had so much fun doing it, and he wants to do more,” Johnson said.

Now, it’s time to start dream casting for a Knives Out sequel. Could Johnson coax Bill Murray into the fold? What about Star Wars: The Last Jedi star Adam Driver, preferably in a cable-knit sweater? Florence Pugh? Henry Golding? The Rock? The possibilities are endless – and hopefully we won’t have too long to find out who’s going to put the “who” in whodunit once all the pieces start to come together.

Find out what’s heading to theaters in 2020 with our movie release dates calendar.