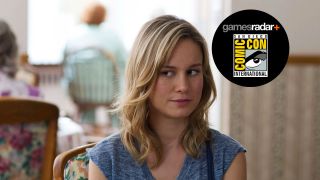 Marvel hit a home run today at San Diego Comic Con, showcasing plenty of sneak peeks and swanky new logos for its upcoming slate. But one of the most welcome reveals came toward the end of the panel, when studio head Kevin Feige confirmed what we pretty much knew anyway: Brie Larson will play Captain Marvel.

It was first rumored back in June that the Oscar-winner would be joining the Marvel Cinematic Universe. While she will - obviously - be headlining the character's standalone film, the studio isn't letting slip when she might make her MCU debut. Feige referred to her as the newest member of the Marvel family (aww) but refused to give up details on whether she'll make a cheeky cameo in the near future.

Who are they kidding? Of course she will!

We still know remarkably little about the movie so far, except that Larson will be playing Air Force pilot Carol Danvers - the sixth Marvel character to adopt the Captain Marvel monicker. With her confirmation in the bag might we start to see some early concept art? It's possible. But until then, take a peek at the first logo for the film that Marvel unveiled today:

Captain Marvel is set to fly into theaters on March 8, 2019.