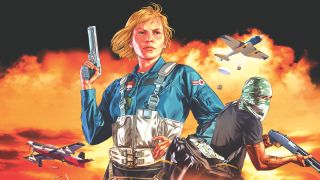 The Smuggler’s Run expansion for GTA Online brought a host of new air-themed missions to Rockstar’s seemingly everlasting open-world smash. As suggested by the name, you build up a smuggling empire, which you kick off by buying a hangar either in Los Santos airport, or even better, the military base of Fort Zancudo.

The latter is a particularly exciting choice, since before now, lingering in Zancudo for any longer than 20 seconds usually ended with a bullet to the head, or your stolen military aircraft being shot down with rockets. Now, it’s the home of my jet-powered criminal empire. Well, I say ‘empire’. It’s really more of an opportunity for me to admire my collection of aeroplanes like a friendless millionaire.

Zancudo is a novel location to set up shop in Smuggler’s Run. For players who have driven across GTA 5’s lovely map as much as I have, this is the most unknowable location remaining, thanks to its previously aggressive security forces. Now, though, I can waltz in through the front gate on my motorbike that looks like it was made exclusively for sad dads, and the army guys just let me drive right past, rather than hunting me down like I just pissed on their chips. It cost a lot of in-game dollars for the privilege, but it was worth it for a few reasons.

Aside from the neat surroundings, you see, owning a hangar in Zancudo also lets you steal airplanes from the military without getting the attention of the police. So rather than having to save up and buy a Hydra jet from in-game shop Warstock, you can pop outside at any time and steal the similarly-good Lazer, which is a terrific bonus.

This isn’t necessarily great news for other players, though. I have a confession: I’ve gradually turned into a dick in GTA Online. Not a full-on menace who goes out to grief other players, you understand, but as I’ve amassed fun toys like my rocket-equipped buzzard chopper and my HVY Nightmask jeep (which has front-mounted machine guns) I’ve gradually been using them to spoil other people’s good times. I’ll turn up, let off a few rockets or try to blow up someone’s car, then flee before my own self-esteem can be brought down a peg.

Why am I doing this, when I hate other players who do this to me? Well, rather than take responsibility and chalk it up to an obvious personality problem, I’m going to go ahead and blame this on ennui towards modern life and a lingering sense of political uncertainty. Yeah, that’ll do. The other thing is, this kind of chaos and player-created interruption is the essence of GTA Online, to some degree. These vehicles are sold with attached weapons for a reason, and GTA’s rarely been about politeness towards your fellow man. I don’t feel good about myself when I fly my Lazer over a highway and send a couple of rockets exploding into another player’s car, but I do feel something.

Recent events have challenged my growing sense of immorality, though. GTA’s business activities are the way to make big money in the game, and they require completing a bunch of supply missions before travelling across the map to deliver them on a public server. This means other players can interrupt the journey if you’re unlucky, as your supplies pop up on the map for everyone to see. Including me.

Still wishing for GTA 5’s story DLC? GTA: Online’s The Doomsday Heist is out now, and it's the next best thing.

I join a server and leave my hangar. I jump into a Lazer and take off, my intention being to parachute onto the city’s pier and potter around for no real reason. On the way, though, a red icon pops up on the map, showing that a supply mission is taking place on a nearby hilly road. If I kill these guys, there could be a fair chunk of cash up for grabs, and if nothing else, it will annoy them, which is apparently what I enjoy doing these days. I fly over, and police are swarming the two vehicles performing the deliveries. Hoping to hit the players, I let off a few rockets, and accidentally bring down two of the three helicopters unloading machine gun fire upon them. Ah well, I’ll try again. I come in for another pass, this time sending rockets towards the cars in the midst of the chase. Unfortunately, the rockets home in on the police cars instead, clearing a path for the delivery. This is not going well.

Another pass: more cop cars blow up, while the human players remain unscathed. What the hell? I turn the Lazer’s homing function off, and freefire rockets at them instead, but again I narrowly miss, and hit another cop car. By the time I turn for another pass, they’ve reached their destination and the supplies are lost forever. You can picture what I did there, reader. I didn’t troll them: I inadvertently helped them finish the mission. Annoyingly, there’s now a slightly warm feeling building within me that’s the result of being nice to someone in an online game. How awful.

Then a notification pops up: the players who I just helped invite me to join their motorcycle club. I’m slightly moved. They think I’m a good man, and they want to reward my selfless protection services with an outreach of friendship in this cold world of online, never knowing the truth that I wanted to murder them and steal their stuff just for a laugh. I could pretend that I am the person they believe me to be, and put myself back on a righteous path in GTA Online. Well, as righteous as you can get in a game where can shoot fireworks at pedestrians for fun.

I’m not that guy, though. I will continue down the road of bad behaviour and ignore their friendly gesture, vanishing towards the coast in my Lazer, before accidentally crashing it into a building. I’m running with scissors in GTA Online, and that’s just the way it’s going to be. I didn’t choose the dick life – the dick life chose me.