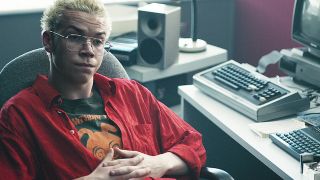 It’s been a few weeks now since Black Mirror: Bandersnatch hit Netflix and yet, people are still talking about it. Why? Because it’s the first of its kind, offering viewers the chance to actually influence what happens and make decisions about where the story goes.

A Netflix Original movie from the mind of Charlie Brooker, Bandersnatch tells the tale of the troubled Stefan Butler (Fionn Whitehead) who wants to turn his favourite choose-your-own-adventure book, Bandersnatch, into a video game. You follow him on his journey as he’s offered a position at video game company Tuckersoft, but struggles to complete his game due to mental health issues tied to the death of his mother.

You make decisions for him along the way, from little things like what he has for breakfast and the music he listens to, to bigger choices about working at Tuckersoft and whether he should take his medication. Each choice you make takes you down a different narrative path meaning there’s multiple endings to discover, and you can even go back and change your decisions to find new finales.

"I revelled in the possibilities"

I was in awe after watching/playing Black Mirror: Bandersnatch. Never have I encountered an entertainment experience like it. While I was worried that the stop-start nature of a film which takes your decisions into account would make for an unsatisfying viewing-experience, those concerns were dashed within minutes as I was sucked into the interactive, almost game-like, nature of the film.

Fair warning, I’m not a gamer, so no-one was more surprised than I that the thing I enjoyed the most about Bandersnatch was the interactive element. Maybe it had something to do with the fact that I’m much more used to being a passive audience for films, but I went a bit mad with power as soon as Netflix offered me the option to choose between Sugar Puffs and Frosties and never looked back! Something about controlling Stefan’s actions just sent me off the deep end and, before I knew it, I was telling him all about Netflix and cackling gleefully as he spiraled out of control trying to wrap his head around being controlled by someone from the future. By me.

Every Black Mirror: Bandersnatch ending explained and how to get them

Let’s be honest, no-one watched Bandersnatch for the plot. The tale of wannabe programmer Stefan is an interesting, if not fully formed, idea, but if I’d watched it play out like a ‘normal’ film, there’s nowhere near enough meat on the narrative bone to satisfy. Of course, a lean plot is necessary for a film like Bandersnatch, which can go on for hours depending on how many loops you play through, but this is precisely why the gaming element is what makes Bandersnatch special. Without it, you have nothing more than a well-made short with hidden potential.

What makes Bandersnatch stand out amongst the vast number of films that are made every day is that fact that you can influence how the story plays out. Even though there’s obviously a finite number of possible endings, it’s still a load more than the one ending you usually get with traditional films. And it’s not just about where you end up, but how you get there - the journey itself. I love talking to people about the choices they made while watching/playing Bandersnatch, but also, why they made them. Did you make decisions based on what you thought Stefan would do himself? Or did you just choose what you would do in that situation? Most people, at least once, give into their sadistic side and see what happens when they make the most fucked up choices available, and the fact that you can repeat decisions and loops means you can explore every possibility.

This is what Bandersnatch gave me that no other movie had ever been able to. Before you say it, I know it’s just an illusion of choice and I had no real control over what played out on screen, but it still provided me with more influence on a narrative that wasn’t my own than I’d ever had before, and I revelled in the possibilities. To me, Bandersnatch is both a movie and a game and something entirely new. It’s a lesson in human psychology, a thesis on the illusion free will, and one hell of an entertaining few hours all rolled into one. And, perhaps most importantly, it’s only the beginning. Lauren O’Callaghan

"The interactive element kills the real pleasure of the story"

The idea of a choose-your-own-adventure movie has thrilled me for years. I mean, what cinephile wouldn’t want agency over a movie? To call the shots, step into the world of the film’s characters, to influence their choices. Finally, instead of shouting at the screen hoping the clueless, drunk high schooler won’t run into the woods in the middle of the night, I could make them stay in the cabin with a click of the remote.

To begin, I revelled in making Stefan’s decisions; I was bowed over by the newness of it all. By the time I’d clicked through two rounds of his tale, eventually met by the Exit to Credits option, the whole thing tumbled down like a house of cards. For me, it rang hollow. All those paths untaken, the road not traveled, were they better? Would those choices give me what I so desperately craved, and what Bandersnatch never gave me, closure? Really, that’s what it boiled down to for me. A concept so enamoured by its own design, it fails to give viewers what we ultimately desire: completion. A sealed narrative. I don’t want to chase my tail, especially with a story like Stefan’s, which I loved. His journey as a wannabe game designer in the early ‘80s is intriguing as hell, dabbling with the showy first stages of true talent, while realising the vagaries of the industry. Throw in the backstory of Bandersnatch’s author, and the acid-fuelled rants of Will Poulter’s veteran designer, poking at the doors between realities, and I was hooked.

The best Black Mirror: Bandersnatch Easter eggs, references, and things you might have missed

See, this is the type of story that I gravitate towards; something that flickers on the periphery of standard Hollywood fare. Something to be cracked, a puzzle to be solved. This is where my desire for a choose-your-own-adventure movie emerged years ago, by watching films that don’t necessarily require multiple viewings to be enjoyed or understood, but it’s amid those repeat visits that the joy of movie-watching deepens. Movies that I now count among my favourites, like Mulholland Drive and Donnie Darko, stoke the detective in me. Every viewing leads me down a different path, gives me a new clue to pursue, in the hopes of understanding the tangled web at the heart of their plottings.

Bandersnatch, I hoped, would broaden that experience by letting me in on the mystery and giving me control. But the interactive element kills the real pleasure of the story, for the absolute truth of Stefan’s journey never really exists. That feeling I seek is perpetually and purposefully out of reach. When there are trillions of permutations of Bandersnatch, is it really a surprise that I was left wanting, not feeling satiated in the slightest? When you reach one of its endings, knowing that you can simply go back and change it all, something is lost. It’s this single element that rages against the way movies typically work. They serve as strange mirrors to life, not quite the same, impostors of a sort, that stay true to this one immutable fact: we aren’t given the luxury of do-overs when we make mistakes. On that note, it’s hard for me to say whether Bandersnatch is “good” or “bad” because it is never finished, and, quite simply and frustratingly, it is never over. Gem Seddon

If you’re looking for your next streaming obsession, check out the best movies on Netflix and the best shows on Netflix right now.