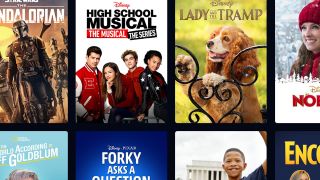 The thought of investing in yet another streaming service can strike fear into the heart of even the bravest soul, but fortunately for us, the Disney Plus price is… surprisingly low, actually. In fact, the average Disney Plus cost comes in at around a third less than a Standard HD month of Netflix. That's cracking value for money, especially considering how much content is currently waiting for you on there. Indeed, the new streaming service is packed with hundreds of movies, documentaries, and TV shows like Star Wars live-action series The Mandalorian (not to mention every episode of The Simpsons). It's a bargain, in other words.

Although the Disney Plus cost will vary from region to region, it's still very competitive no matter where in the world you are. To save you time, we've listed them below and will keep this page updated if anything changes. And because the Disney Plus UK price has finally be unveiled, we've included that here too.

Oh, and one more thing - remember to grab a Disney Plus free trial if you'd like to test the waters first before diving into a full Disney Plus sign-up.

Disney Plus price - US

Disney Plus, Hulu, and ESPN+ bundle | $12.99 per month
This tasty bundle gets you three services for the cost of a single month of Netflix - it's an absolute steal.
View Deal

Disney Plus gift subscription card (1 year) | $69.99 one-off payment
Want to give Disney Plus to a loved one? This is the way. Note: this gift card can only be used by new members.
View Deal

Disney Plus will set you back just $6.99 per month in the US, and you can grab a full year for only $70 if you'd prefer (that's a saving of around $14). What's more, there are a ton of deals stateside if you're keen to save money. To begin with, there's an excellent bundle that gets you Disney Plus, Hulu, and ESPN+ for a mere $12.99p/m. That's the cost of a standard month of Netflix for triple the amount of content. What's more, you can also pick up a Disney Plus gift card for $69.99 if you want to give it to someone else. Finally, Verizon is giving away a full year for free with certain data plans.

Disney Plus | £5.99 per month
Even though Disney Plus is inexpensive elsewhere, this is cheaper than we thought it'd be in the UK - that's a steal.View Deal

The cost of Disney Plus in the UK has now been confirmed as £5.99 per month or £59.99 for a year's subscription when it launches 24 March 2020, and that's really good news - it's a lot cheaper than we thought it'd be, particularly for a year's membership. We'll let you know as and when any other deals pop up.

If you're living in Australia, you can get your hands on Disney Plus for $8.99p/m. That's not bad going at all. Meanwhile, New Zealand is able to sign up for $9.99p/m. Sweet.

There doesn't seem to be any specific deal beyond that for the Australia/New Zealand region, but never fear - the base price is still great value considering the fact that it features 4K resolution as standard.

Want to get in on the Disney Plus action in Canada? It'll set you back $8.99 per month. That's a steal for a service with hundreds of hours of entertainment. As with Australia and New Zealand, we can't find any other tempting deals out there right now. However, the base package is still a solid offer nonetheless so it's not all bad. We'll let you know if we find any discounts.

Disney Plus price - The Netherlands

If you live in The Netherlands, a month's subscription to Disney Plus will cost you €6.99 per month. We hope that'll be the price throughout most EU nations when the time comes, particularly in France, Germany, and Italy upon launch in March 2020. We'll keep you updated when we know more!