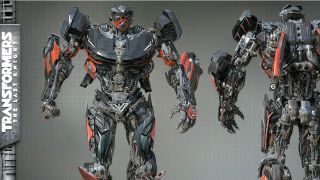 One of the most well know and loved Autobots will finally be making his debut in Transformers The Last Knight. As you can see in the tweet below from the official movie account, Hot Rod is in.

Hot Rod: This is no cartoon. #transformers pic.twitter.com/6cF83EnhgDAugust 4, 2016

It looks like he's going to have close ties with Bumblebee, while being described as 'brash, slightly arrogant and protector'. That protector bit could be a hint of what we could expect in the movie, as in the original animated film and subsequent continuities the character eventually took the place of Optimus - becoming Rodimus Prime, the new leader of the Autobots. Given that this is Michael Bay's last film as director before handing off to others for Transformer's ten year movie plan, it makes sense there could be a few big changes on the way.