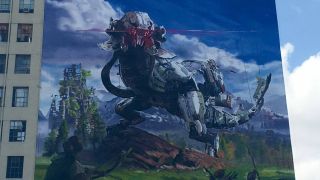 We've barely heard a peep about Horizon: Zero Dawn, the robo-dino hunting action RPG from the makers of Killzone, since it was announced last summer. But it looks like Guerrilla Games and Sony are getting ready to give the PS4 exclusive its second coming out party at E3 - at least, if gigantic billboards near the Los Angeles Convention Center are any indication.

A Thunderjaw keeps a watchful eye on downtown LA. pic.twitter.com/1gSbHGNR1kMay 24, 2016

Horizon: Zero Dawn was originally announced with a 2016 release date. A rumored delay wouldn't be surprising for an ambitious new project like this, but PS4 could really use an exclusive like Horizon for the holidays this year, especially if those reports of a powered-up PS4 Neo coming around then are true. An open world rich with lush foliage and shiny dinobots would be a great way to show off the system's (theoretically) improved graphical power.