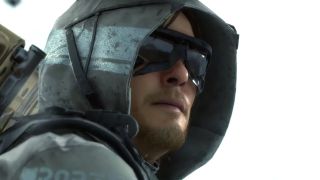 Hideo Kojima has been known for his... off-kilter publicity stunts but, if this latest appearance from Death Stranding turns out to be one of his silly games, it surely takes the cake.

Recently, a new perfume commercial from Brazilian cosmetic company O Boticário appeared online (so far, so normal), but those who have been keeping up with all the latest Death Stranding trailers noticed (via Reddit) that it features a shot-for-shot recreation of one of the monsters featured in Kojima's upcoming new game of 2019.

Seriously, check out a side by side comparison from MP1st in the video below, and try to pretend there's no funny business going on. the likeness is so uncanny that we either have to assume Kojima is marketing his game through the Brazilian perfume industry, or O Boticário may be getting a sternly worded letter from PlayStation over the next few days.

The full trailer can be watched here and, to its credit, the entire thing is so weird and barmy that you could easily mistake it for a Kojima-directed affair, but the Death Stranding appearance arrives at the 0:48 mark, for reference.

Kojima himself has yet to comment on or address this strange turn of events, presumably because he's squirrelling away making Death Stranding the best game it can be before it's November 8, 2019 release date.

The famed game director and creator of the Metal Gear Solid series did recently appear during the San Diego Comic Con 2019 schedule, casually dropping the bombshell that he was initially recommended Keanu Reeves for the lead role in his upcoming PS4 game, but went with Norman Reedus instead. Not everything can be Cyberpunk 2077, I suppose.

For more, feast your eyes on the recently revealed Death Stranding box art, or watch our Release Radar video to discover everything else out this week.