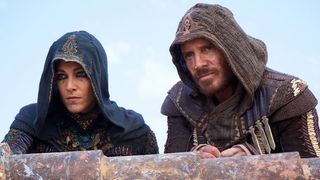 Ubisoft has been very clear that we're in a new historical time period with a new Brotherhood of Assassins in the Assassin's Creed movie but I've spotted more than a hint at a cameo from none other than Ezio Auditore.

Michael Fassbender's Callum Lynch is trapped inside Abstergo and forced to undergo Animus sessions to experience the memories of his ancestor Aguilar but he isn't alone. Among the Assassin's Creed movie cast there are a stack of other descendants in there, each with an Assassin in their bloodline.

Now, we've already had confirmation from Michael K. Williams that his character Moussa is a descendant of Baptiste, a 'voodoo poisoner' Assassin turned Templar who we've already seen in Assassin's Creed Liberation. Presumably the fact that he is listed as playing both characters, means we'll actively see Baptiste in Moussa's memories. But what about the other Assassins? Here's where things get interesting.

In the cast list, Swedish actor Matias Verala is named as a 21st century character called Emir. However, in production notes. we're told that he is linked to an Assassin of Middle Eastern descent who lived "where East meets West and observed and knew perhaps one of the most accomplished Assassins of all time". Huh.

Istanbul is often described as being as the place 'where East meets West'. The old name of Istanbul? Constantinople which just happens to be location of Ezio's last adventures in Revelations and where the noted Master Assassin met his wife. I don't think it's too much of a leap of faith to say that Emir's ancestor knew Ezio Auditore.

When it comes to who the ancestor actually is, I'm guessing at leader of the Ottoman Assassins Yusuf Tazim who you might remember as Ezio's ally and the man who also dressed up as a minstrel alongside him in one memorable mission. If we're going to see Ezio Auditore in the movie, it will be through Emir's flashbacks in the Animus.

In terms of other Assassins, the fun doesn't stop there. Another member of the cast is English actor Callum Turner who plays another Abstergo inmate, Nathan. Nathan apparently doesn't trust Fassbender's Callum Lynch and feels like he might defect to the Templars. There are hints in the production notes that this comes from Nathan's own regressions - his currently unnamed Assassin ancestor means he doesn't trust anyone.

“It’s a fascinating decision to make; to be so convinced and unwavering in your belief, and then have one little thing change your mind and put you on the other side,” says Turner. Who do we know in the game world that changes his mind and pops him on the other side? Shay Cormac from Assassin's Creed Rogue is currently our only main Assassin who turned to the ways of the dark Templar side. This definitely doesn't seem like a coincidence.

And finally, there's Lin, a Chinese Assassin linked to an ancestor who "is well travelled and hardened by the struggles of life for a woman in 16th century China". Given that Assassin's Creed Chronicles China's Shao Jun travelled the world in search of Ezio and was around in the 16th century, the pieces fit into place nicely without any need to do any kind of frustrating cipher puzzles.

To see a thorough breakdown of the movie's characters, check out my full Assassin's Creed cast guide.