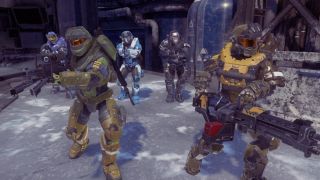 Halo 5 is getting one of its most significant additions thanks to the Memories of Reach update. The free DLC package adds Infection mode and armor themed around Noble team from Halo: Reach, and it's live today.

Infection is the Halo universe's equivalent of zombies, where players who are "infected" try to take out ordinary Spartans. Get killed by an infected player and you'll join their team, spreading the disease until everyone has been turned or time runs out. As for the Noble Team armor, all you need do is look above to know everything you need to know: it looks cool as hell.

Those aren't the only bonuses being added to the game though. There's also a Memories of Reach-specific REQ pack you can purchase if you want to ensure you get Noble Team's armor, regular Gold and Silver-tier REQ packs are more likely to grant you permanent unlocks like weapons and armor instead of emblems, a Legendary quality Phaeton can now be piloted, and Forge now features more skins and material options. You'll even be able to prioritize multiplayer matchmaking on skill over network connection or vice versa.

Developer 343 Industries announced last summer that free DLC was planned until June. With just a few weeks to go until we hit that deadline, it'll be interesting to see what else the team can squeeze out for fans.