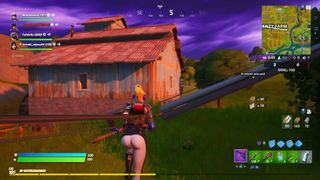 Fortnite has introduced the new Unreal Chaos Engine, a physics-focused system within Epic’s Unreal Engine, and a swarm of bugs have come for the ride. The move to Epic’s new physics system was discussed by the company several times over the last few weeks and today the changes finally took effect, and not for the better.

Players are reporting all kinds of problems such as clipping through walls, broken revives, and even boats that can drive on land. These bug-laden video clips within the Fortnite community are gaining momentum in a manner not unlike that which we saw from the awesomely broken WWE 2K20, though maybe the Fortnite bugs aren’t quite as entertaining. Still, wooden cars are a bit strange, aren’t they?

Have you heard about the wooden car? With wooden wheels? And wooden engine? It wooden start. from r/FortNiteBR

The transition to the new physics system has been rumored to be the cause for Fortnite’s extended first season of Chapter 2. By the time season 2 arrives on February 20, it will have been well over 100 days since the season began - 128 to be precise - which makes Chapter 2 season 1 the longest season of Fortnite ever.

Strangely, other than the move to the new physics system, there’s not a heck of a lot different in the game today. The patch notes from Epic’s official site introduce a new limited-time mode in the community-made Love and War, a Fortnite spin on Search and Destroy. Other than that, minor bug fixes are about the extent of the changes, which may imply Epic is well aware of the bugs and is hoping to work through them in this small update before the new season begins.

If you’re new to Fortnite, here’s our handy guide to get you going.