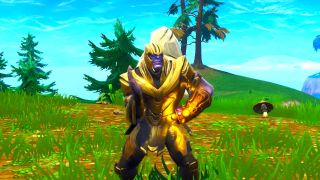 Fortnite's new limited-time mode adds Thanos as a special character for whoever's fast enough to claim the Infinity Gauntlet, but he isn't too special to dance. Blessedly, Thanos can perform all the same emotes as standard Fortnite characters, which means that many players who grab the gauntlet take time out of their busy murder schedules to break it down, in various styles, sometimes with company! Take a look at the results.

It's not unusual (okay, it's a little unusual)

The dabbing was inevitable

If you just gotta have more rhythmic Thanos gyrations, you can check out a pretty comprehensive compilation in this YouTube video.

I have to wonder if Marvel realized that Fortnite Season 4 players would be able to dance and dab around all day as Thanos when it first made the deal with Epic Games. You could argue that it's not quite in character for the grim, world-destroying villain. But Fortnite is a goofy fun world where supplies are hidden in llama pinatas and bushes are the best form of camouflage - Marvel couldn't have realistically expected things to not get weird when it signed off on the crossover event.

I think this Reddit comment pretty much sums up my feelings on this entire state of affairs.

Wondering what gear might give you the best shot at taking down the mad titan? Our Fortnite weapons guide should help.