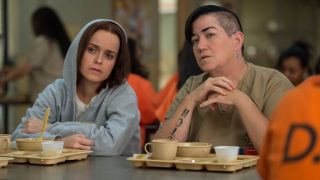 The last time we saw the Litchfield ladies, life was rosy. The inmates were frolicking in a nearby lake, basking in the sun and having a bit of a laugh. It was as if they weren't incarcerated at all. That moment of freedom wasn't going to last long though, was it? With just over a month to go until the next chapter of their story, the first trailer for Orange Is The New Black season 4 has given us a lot to chew over. And it ain't pretty:

The biggest surprises here are perhaps who's not included. There's no Alex, who was approached by a shiv-wielding lunatic in the greenhouse, no Stella and no sign of Nicky. But with a mass influx of new inmates, it's not as if the show is starving for characters.

The prison becoming privatised looks to be a major catalyst in driving everyone up the wall. Over a hundred more bodies and extra CO's is going to have an effect on our dysfunctional prison family. Piper's dealing with more turmoil, and in true Piper-style, it looks to be brought on by more of her meddling. Sophia's in SHU, Red's angry, Crazy Eyes is getting dosed with something, Pennsatucky is in pain, Morello's pissed... it's not the happy-go-lucky bunch we know and love.

Thank goodness for Taystee, who now works as Caputo's secretary, giving us the only solid laugh in the whole trailer.

Orange Is The New Black season 4 arrives on Netflix June 17.