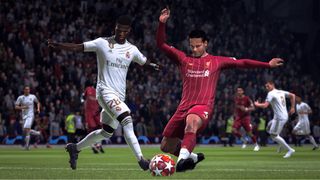 FIFA Ultimate Team has been an enormously successful formula for the last 10 years of the world's most popular football game, but it has become somewhat static in its evolution. While some parts of the game like The Journey and women's football have been improved upon, not to mention the upcoming FIFA 20 Volta mode, little development has been seen within Ultimate Team. Despite that, entry level FUT content has always been accessible to everyone, whether your addiction stems from completing every Squad Building Challenge, qualifying for Weekend League week in, week out, or simply playing to move up through the divisions. EA is listening to the complaints about lack of developments though, and courtesy of a press presentation, we've got some of the details about FUT in FIFA 20 below.

Seasons are coming to FIFA 20 Ultimate Team. Over a set period of time, you'll have an opportunity to get your hands on a series of unlockables as you pour time into FIFA 20 and reach certain XP thresholds – if you're trying to get a clearer picture of how this will work, think about how seasons and battle pass systems are presented in battle royale games like Apex Legends and Fortnite. FIFA 20 seasons will be six to eight weeks long, and there will be 30 levels in total to progress through.

In terms of the rewards, the examples shown to us were loan players and badges, but it's pretty safe to expect more cosmetics like kits, stadiums and the like alongside them. Seasons will also introduce season objectives, which EA says they want to have about the same impact on the game that Squad Building Challenges have had for the last couple of years. These will essentially be challenges to complete over the course of a season; in the example we saw, the focal point was on Eden Hazard. If you do things like score for Belgium, win in Division Rivals, that sort of thing, then the end reward was a One To Watch Hazard card.

Throughout the life cycle of the game, there will also be milestone objectives to keep an eye on and work towards. Things like scoring 100 finesse shots, 100 headers, 100 volleys, etc. are all part of a category called "Century of Goals" and when completed, you'll earn a 16-bit ball to use on the pitch. These sorts of rewards are part of a new effort to add more customisation into the game so players can personalise their experience even further. Stadium themes and tifos are two new types that can be unlocked, so players don't have to stick to authentic badges and kits all the time. Anyone fancy having an enormous dabbing unicorn behind the goals? I'm more of a flossing chicken person myself.

Some of the best players in FIFA Ultimate Team are locked behind walls that only the most dedicated of players can get past, unless you get seriously lucky in packs. Catching a glimpse of Icons like Ronaldo and Gullit is common in the best teams, such as those owned by pro esports players and the like, as are Team of the Season cards, and all the other special cards that get buffed as part of one promo or another. Most of these players will sell for millions on the transfer market, which is simply unattainable for most players unless they focus on gaming the transfer market and flipping cards – which is a serious time dedication in itself – or dropping a lot of money on the game to either reap the rewards through packs, or sell the players they do get to build up more coins.

EA has recognised this issue and said clearly that their goal is to make FIFA Ultimate Team "easier and more accessible", because these special cards are considered elite content and too hard to come by for most players. In FIFA 19, there was the odd guaranteed special player, but most were locked behind Squad Building Challenges (SBCs) anyway, which required an investment from the player in the first place; now these players can be earned through simply playing, as long as you complete the correct challenges each season. The end result for this should ultimately be a more level playing field for players across the board, but EA is fond of their packs and microtransactions, so maybe this is still just a pipe dream.

Squad Battles has undergone a few changes too, namely with the interface and accessibility. When looking at each potential opponent, you'll be able to see their top three highest rated players before you challenge them, along with some tactical details like formation and mentality. You can challenge up to 40 squads per week as the timed refresh limit has been removed - although only the first 10 will count toward the weekly standings - and the Team of the Week is now available as a squad battle, which you can replay over and over to try and improve your score. If you're a Squad Battles aficionado, these are some small but sublime adjustments.

Every FIFA player knows just how stressful the game can be at times, and EA has said that they're listening to those complaints. Another new feature coming to the game is FIFA Ultimate Team Friendlies, which is exactly as it sounds; friendlies in FIFA Ultimate Team. They were already available but now there's more options with extra stat tracking, and for the first time, you can play with house rules online.

House rules were introduced in FIFA 19 but only available in local Kick Off, but now they can be played within FIFA Ultimate Team, and there's four new modes being introduced. Max Chemistry ignores the chemistry aspect of the game so you can play with whichever players you want, no matter their affiliation to other players on the team. Swaps randomly exchanges three players from each team, which leads to some people including bronze players in the hopes they get swapped. King of the Hill introduces small zones on the pitch and when you retain possession inside them, you're given a goal meter to build up. Score while the goal meter is in effect and one goal can be worth three. Then there's also Mystery Ball, that adds different modifiers to the ball whenever it goes out of play, like speed, dribbling, and shooting boosts.

When it comes to the central FIFA 20 Ultimate Team experience, the active squad page will now be the first thing you see, making it easier to amend your main squad on the fly. Performing actions on players is much easier with a new wheel that appears with all the options, and whenever you're searching for a player on the market, it defaults to the number of coins you have currently so you're not presented with loads of unaffordable players. When asked about having extra search filters within the "special" category like OTW, TOTY, TOTW etc, EA confirmed that they are being worked on but won't be available on launch, as they're "more difficult to implement than you may think, but we have heard the feedback."

While I haven't had the opportunity to play Ultimate Team in FIFA 20 yet, or even browse the menus outside of the presentation, it's clear that these additions are going to be welcomed by the community because it's simply more content. Giving players more to strive for and customise their club with is hardly a bad thing, but the underlying problem is still there; FIFA Ultimate Team only exists because of how successful and predatory the microtransactions are, and the only way EA can ease the qualms surrounding the mode is to make packs have a higher chance of rewarding something great, and to perhaps implement a daily limit on the amount that can be bought. Until then, FIFA Ultimate Team will continue to be the subject of much warranted criticism.

Take a look at all of the new FIFA 20 icons along with some of our predictions for the new game, here's all of the confirmed FIFA 20 stadiums, and read the full FUT 20 pitch notes on the official site.