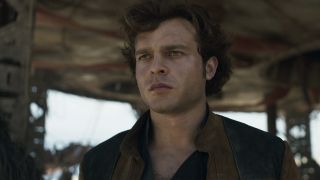 It’s nearly upon us. 2018’s big ol’ offering from a galaxy far, far away, Solo: A Star Wars Story, is just on the horizon. But there’s always been a bit of doubt, hasn’t there? Director chaos, reshoots and a trailer delay – it’s had it all. So, how does it stack up to expectations? Here are the first reactions to the Han Solo movie after its world premiere. Mild spoilers follow…

After the emotional baggage we were lumbered with in both Star Wars: Rogue One and Star Wars: The Last Jedi, it seems like the Han Solo movie is going to bring the good times and have us grinning all the way through. Arguably the most ‘fun’ Star Wars movie yet? It may well be.

Solo: A Star Wars Story has a light tone and has some great action sequences. There were great moments but some were a bit too on the nose for me. The Chewie/Han bromance is the thing to watch for.11 May 2018

I loved #SoloAStarWarsStory so much. It’s a western. A caper. Funny with so much heart. It’s got so much surprises that fans are going to love. Donald Glover is charming x1000. Alden Ehrenreich is a great #HanSolo and just know I’ve been saying this for years! Fave new #StarWars.11 May 2018

I am unbelievably happy right now. #hansolo11 May 2018

Hardly a surprise here, but Donald Glover sounds like he steals the show as Lando. While not on the level of having to step into Harrison Ford’s roguish boots, Billy Dee Williams is still a tough act to follow. Glover’s made the role his own.

Solo: pure wonderful adventure. Alden IS Han. Glover IS Lando. Great palet cleanser after heavier TLJ and Rogue One. A true summer adventure. Not best film of the year or anything, but prepare to have a really good time.11 May 2018

SOLO was SO much better than I was expecting! It balanced fan service w/ meaningful storytelling, and it’s an absolute blast. Full of Easter eggs & deep cut references. The cast oozed charisma, especially Donald Glover as Lando & Phoebe Waller-Bridge as L3-37. #HanSolo #StarWars pic.twitter.com/xzXNWleU1511 May 2018

The first act of SOLO: A STAR WARS STORY can be hit and miss clunky. But once Donald Glover's Lando shows up (who is legit fantastic) and the Kessel Run heist plot kicks in, it's a whole lot of fun. (And those who've always wanted a Han and Chewbacca shower scene are in luck.)11 May 2018

Disney love a good franchise, don’t they? Even so, I’m surprised that they appear to be going all blasters blazing when it comes to setting up sequels. Still, there’s plenty of time in-between the Han Solo movie and A New Hope. It’s a period we’ll have plenty of time to get acquainted with by the sounds of it.

Oh, and this is for sure now the Solo Franchise. It's not really hiding the fact it's setting up more Han Solo movies.11 May 2018

Stay away from spoilers, y'hear?

Now… this is intriguing. I don’t want to speculate – so read the tweet and get very, very excited.

#Solo was a blast. The Kasdans nail the character of Han Solo. Yes, the story is a series of expected events (Han meets chewie....etc) but none of them happen as expected. Stay away from spoilers, big Marvel-level shit that will make you wonder where Lucasfilm is headed next.11 May 2018

So far, so positive. If anyone could rescue victory from the jaws of defeat and come out swaggering, it’s Han Solo. The movie drops worldwide on 25 May.

Han Solo’s had a few half-decent one-liners over the years, hasn’t he? Brush up on his (and others’) best Star Wars quotes before shooting off to the theaters this month.