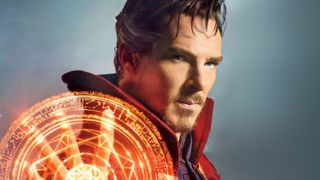 Doctor Strange is a little over three months away from its cinematic debut, and slowly but surely Marvel are beginning to step up their marketing campaign. Some colourful concept art for the film made its way online last week, and while the latest poster hasn't been officially released yet many eagle-eyed fans have spotted it in cinemas.

Here's a better look at the new #DoctorStrange poster I found!! Enjoy! pic.twitter.com/YnGuXSOZzfJuly 17, 2016

The poster has Benedict Cumberbatch's titular character in a familiar location; We've already had a couple of one-sheets that feature Strange in the Sanctum Sanctorum, but this time he's in a new pose. It gives us our best look yet at the Sorcerer Supreme's costume - which is definitely one of the cooler-looking get-ups in the MCU - and I'm looking forward to seeing it in action.