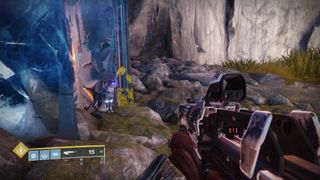 The Dreaming City in Destiny 2: Forsaken is stuffed to the gills with secrets and Easter eggs, from Ascendant Chests to Corrupted Eggs. Curiously, there are also several hidden cat statues hidden around the place, and these are some of the most reliable sources of Reverie Dawn armor and Dreaming City weapons. The first time you find one, you might be told that "you lack something." OK, rude. To trade with these cats, you'll need A Small Gift. Here's how to earn gifts and where to find these finicky felines.

How to get A Small Gift in Destiny 2: Forsaken

The Small Gift is a random drop acquired from doing a number of different events within Destiny 2: Forsaken's Dreaming City, including Patrols, Lost Sectors, and any of the Blind Well's four scaled tiers. It'll show up in your inventory as a Blue rarity item that can't be interacted with, besides the option to dismantle it.

This is where the cats come in. Take one to a nearby feline in the Dreaming City, and they'll reward you with a Legendary weapon or piece of armour, though these little furballs aren't easy to find. Here's an illustrated guide to the ones we've found so far, with details on how you can get to them.

For this first cat, spawn in at the Divilian Mists and head over to the Spine of Keres; where the giant observatory known as The Oracle is found on the North West side of the map. Venture into the observatory and jump up to the highest platform before turning right.

You'll find the little guy by the giant window ahead, staring out at the view beyond.

Head back out of The Oracle building and into the area where you fought Elikaa in the A Hum of Starlight story mission. Head through the crack in the wall on the North West side (if you're facing the observatory), and follow the series of bridges and stairs until you reach a final, rocky platform.

Head through the small crevice and you'll see a crack at the top of the wall on the left. Jump up here, and you'll find a cat sitting on a platform on the other side.

At the North East edge of the main plains in the Divilian Mists, look down to find a series of platforms that you can descend to eventually come across a tiny cave to be entered.

Follow the cave network through to the end, and a cat awaits you next to a lit up structure. You can't miss it.

Journey right to the Southern tip of the Gardens of Esila, where a network of circular platforms are built out against the edge of the map itself.

There's a giant rock on the far, North West edge of the area, with a small tree sprouting from its top. Platform up to the tree, and there'll be a cat located next to it.

Go to the South Western sector of the Strand, until you come to the giant, open door that leads into the interior part of the Gardens of Esila. Instead of going through there, turn left, where there'll be a cliff face.

To the right of that cliff face is another wall that you'll be able to scale. Aim for the tallest tree coming out of its side, and you'll spot a nestled snugly behind it.

On the western side of Rheasilva are a bunch of tall, isolated rocks shooting up from the seemingly bottomless pit below. There is an identifiable platforming path to follow here, but it's not easy, requiring confident use of your Guardian's hover, jump, and flight abilities.

Eventually, you'll spot a flat area hidden behind one of the rocks, with a statue to set it apart from the rest. Get up there to score another cat located by the statue's feet.

Head to Harbinger's Seclude in the North East of Rheasilva, and look for a small, dark room with a glowing tree in the middle.

Tucked within the branches of the tree is another cat, but be warned; it requires some finnicky platforming to make sure your Guardian sticks to one of the branches without falling off.

For this last cat, delver further into Harbinger's Seclude, right to the very end of its halls, and you'll spot a giant archway on the right.

You'll need to get up there, which can be done by scaling the section where it meets the wall on the North East corner. From there, follow the arch all the way round until you come across a cat on the other side.

And that's it! These are all the hidden cat locations we've found so far, but feel free to let us know if we've missed any of them. They're worthwhile gets, as it's one of the easiest ways to get Legendary Gear in Destiny 2: Forsaken, levelling up your Guardian in time for the much anticipated Last Wish raid.

For more Destiny 2 walkthroughs, guides, tips and tricks, make sure you visit our Destiny 2 guide hub, or if you're after some general help then check out our Destiny 2 tips for the things we wish we knew before we started playing.