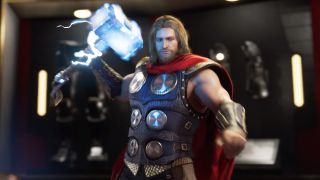 San Diego Comic Con 2019 kicked off earlier today and one of the biggest panels of the day was all about the upcoming Marvel's Avengers. The panel, which was not streamed, included new details about gameplay, cosmetics, and other features of the upcoming third person superhero adventure.

"You'll customize Earth’s Mightiest Heroes and then harness their unique powers to defend the world from escalating threats for years to come," read the official Marvel Avenger's Twitter account that was live tweeting the panel. "We know you're excited for more post-launch details! More information on that at a later date!"

Hall H is very excited! Their enthusiasm is electric. Shaun is now showing us pre-Alpha footage from the Prologue. Shaun: We'll continue to iterate and polish until we ship. Our story begins at A-Day, meant to be a celebration, but ending in tragedy.July 18, 2019

It was confirmed that the footage showcased during the panel would be released to the public a week after Gamescom. It's only speculation from fans, but many have said that the footage looks better than what was shown off at E3.

One attendee was able to capture a glimpse of Hulk's various costumes, including the impeccably dressed  Joe Fixit.

Besides more gameplay footage from the opening of the game, the panel included thoughts from the various voice actors starring in Marvel's Avengers. Troy Baker, Laura Bailey, Nolan North, Travis Willingham, and Jeff Schine, who voice the core team, spoke about what it feels like to play such iconic characters.