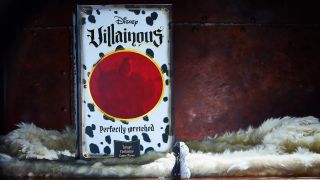 It was only a matter of time before Cruella de Vil sauntered into the Disney Villainous board game, so it may not come as a surprise that she'll join proceedings as of March 1 2020 via the expansion pack Disney Villainous: Perfectly Wretched.

Developer Ravensburger made the announcement ahead of January's London Toy Fair, and this update offers three new baddies to cause chaos with - Cruella, Mother Gothel, and Pete. As always, they're drawn from the length of Disney's 80+ year-history; Cruella obviously drops in from 101 Dalmatians, Mother Gothel arrives from 2010's Tangled, and Pete has been taken from 1928's Steamboat Willie (the first cartoon to include synchronized sound, if you fancy a slice of trivia).

Want to get your hands on it? Disney Villainous: Perfectly Wretched is up for pre-order now at Amazon, Target, Walmart, and all the other usual suspects. However, Target has a special Dalmation edition that comes with a unique box and mover piece design for Cruella herself, including Dalmatian spots. When combined with the recent arrive of Disney Plus and the announcement of a Disney Plus UK price, it's a good time for fans of the House of Mouse.

Disney Villainous: Perfectly Wretched (pre-order for $24.99) |  Amazon | Target
As before, the new Disney Villainous expansion pack is pretty inspired in its choice of characters - that should add some fun new twists to proceedings.View Deal

New to Disney Villainous? Casting you as one of many classic Disney baddies, it's a strategy board game that has you trying to achieve their evil scheme while simultaneously screwing over everyone else. You do this by dropping heroes on your opponents, and backstabbing is definitely the order of the day. That duplicitousness makes it one of the best board games around if you ask us, particularly for those who enjoy something a little more tactical.

If you're keeping count, Disney Villainous: Perfectly Wretched is the third of Ravensburger's Disney Villainous expansions to date - it follows Perfectly Wicked (featuring Snow White's Evil Queen) and Evil Comes Prepared, an update which brought the Lion King's Scar to the table. Because Ravensburger doesn't tend to fill the roster with fan favorites and opts for characters with potentially interesting mechanics instead, it'll be exciting to see what new twists they've got in store for us this time. We can't imagine it'll be the last update to the series, either; the beauty of the original game is that it can be endlessly added to with new baddies from the company's long, long history.

If you're new to this whole thing and fancy giving Disney Villainous a go, check out our list of deals below - they're up-to-the-minute and will get you the lowest possible price.

Don't forget to swot up on Cruella, Gothel, and Pete with a Disney Plus free trial, either.