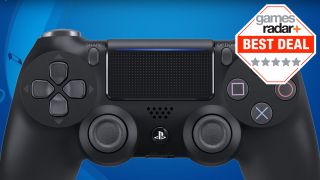 Heads up to anyone looking to grab a cheap PS4 controller - Walmart are currently selling the official wireless handset in classic black for $39.99; a tasty saving of $20. That's the lowest price we've seen for a good while. And although it may not seem like a huge drop, the fact that it normally costs anywhere between $50 - $60 makes this the time to act if you wanted to pick up an extra controller. There's no telling how long it'll last, after all, so it's worth acting now to get the most for your money.

PS4 DualShock 4 controller (Black) | $39.99 at Walmart (save $20)
This deal makes the official PS4 controller much more affordable. Grab one here with this deal.View Deal

PS4 DualShock 4 controller (Black) | £44.99 at Very (save £3)
Based in the UK? There aren't many offers at the moment, so grab this deal if you want to save money on a DualShock 4.View Deal

This cheap PS4 controller deal gets you access to the most recent version of the handset; it has a light strip visible on the touchpad, but still offers the same comfort and accuracy that's been a feature since the console launched way back in late 2013. It can also be used with new tech like the upcoming DualShock 4 Back Button attachment, allowing you to mimic back paddles seen on pro eSports controllers.

There are plenty of other PS4 controllers on offer at Walmart as well, but the discount isn't nearly so big - $10 or so - making them a slightly harder sell. If you're curious, you can take a look for yourself right here.

For more offers and advice on PS4 accessories, don't forget to check out our guide on the best PS4 controllers.