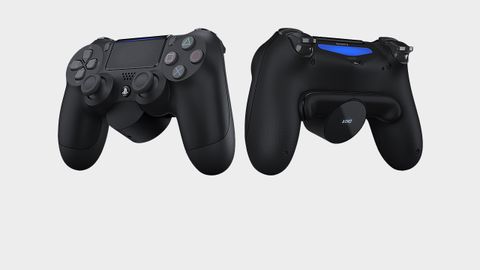 The DualShock 4 Back Button Attachment creates an essential, affordable version of this generation’s most coveted controller upgrade.

Sony has finally turned up to the rear button-and-paddle party. Over the course of the Xbox One/PS4 era, Microsoft has released two high-end Elite controllers (most recently the Xbox One Elite Controller Series 2) offering a premium build and new upgrades, including a set of four remappable paddles. Not only do these paddles give you the kind of control customization usually reserved for PC players, but the rear buttons are also easy to press quickly and do less damage to your hands over time.

Rather than answering the call for an answer to the Xbox Elite with an expensive controller of its own, Sony has opted for a more modest upgrade. The DualShock 4 Back Button Attachment doesn’t magically make the DualShock 4 an Elite-calibur controller, but it brings customization and ergonomic support that will make life easier for any player who plans to grasp a controller for hours at a time. More importantly, at just $30/£26, the attachment makes it far easier for interested players to get their hands on a console hardware innovation previously reserved for the “elite.”

The design and feel

The DualShock 4 back button attachment is pretty easy to understand just by looking at it. It’s a small, wide plastic fixture: Two thin, wide buttons converge on a round LED screen. Behind the face, there’s a rounded holster, with a headset jack and extension connector, which connect the attachment to the controller. It’s smaller and slimmer than Microsoft’s under-side QWERTY keyboard and headset attachments for the Xbox 360 and first-gen Xbox One controllers, which come to mind when I see this kind of first-party bolt-on accessory. Despite adding a little bulk, the controller generally feels comfortable in-hand with the buttons attached, though the controller handles can feel a bit crowded if you’re gripping with two fingers and the ends of the rear buttons sharing the relatively small grips.

The buttons themselves are just slightly wider than the gap between the two grips of the DualShock 4, fitting flush against the controller’s back. The ends of the buttons curve and wrap around the inside edge grips, creating a natural resting place for your middle fingers. The extended buttons allow you to choose between pulling the buttons to the side and pressing up to activate them: Both feel quick and come naturally while playing.

They’re also very well-constructed: Better, I’d say, than the buttons and triggers of the DualShock 4. It feels as if they have longer travel than the face buttons, meaning there’s a longer distance from unpressed to fully pressed. Depending on who you talk to, this could be a problem or a boon. They are definitely more comfortable than the squishy face buttons, but you need to press with intention. Fans of other rear paddles like Scuf and the Elite may complain you can’t flick them very quickly, but if you value comfort, these will do very nicely.

The feature that really makes the attachment, however, is the LED screen. The round screen, which faces backward on the controller, makes it incredibly easy to know what rear buttons do at all times, even as you are changing inputs or switching profiles. Remapping the buttons is incredibly easy: just hold down the adjust button at the bottom of the screen, then press each button to flip through the list of options.

You can set the rear buttons to be almost any input on the controller — only Share and the Home buttons are off-limits — which makes them incredibly versatile. I found that with two buttons it’s best to offload a pair of face buttons that you hit often, like advancing dialogue in Persona 5 with the X button, or picking up items with Triangle in Horizon: Zero Dawn, or vaulting a wall with X in Call of Duty. With two extra buttons, you can’t fully optimize a controller scheme for the back buttons, but you can make it much quicker and easier to navigate your games. That said, every person will find their own way of integrating the buttons with each new game.

Other controllers with rear buttons, like Scufs many controllers, also allow you to remap the buttons without any configuration software. I’ve never been a fan of the software-free route: though it’s easier to change things on the fly and/or when you travel, the process is generally long-winded enough that I need to refresh my memory on how to make the change. Plus, you never receive hard confirmation that you’ve changed the inputs correctly until you try them in your next game. With the screen on the DualShock 4 Back Button though, you know exactly what you’re doing every step of the way.

It also makes it easy to keep track of your presets. The attachment can save and store up to three profile sets of buttons, which you can cycle through by double-pressing the in-screen button. If you have a game or two that you frequently come back to, it’s very helpful to be able to store one or two go-to pairings.

There is one config issue, though it’s pretty minor: When remapping the buttons, you have to keep in mind that the right- and left-hand buttons will be reversed when you’re holding the controller to play. It might have been nice if they put L and R notations on the back to remind you.

The Back Button Attachment is a major upgrade for DualShock 4, especially at $30/£26 (in the UK the attachment is a Game store exclusive for now). If the idea of rear buttons has ever seemed appealing, or if you ever feel strain in your wrists, hands, or fingers after long gameplay sessions, it is absolutely worth the cost to give it a try. While I do not think it obviates better-crafted controllers from other companies, as some players suggested when this attachment was announced, it is a huge step forward in bringing one of this generation’s more interesting hardware updates to the masses.

The DualShock 4 Back Button Attachment creates an essential, affordable version of this generation’s most coveted controller upgrade.