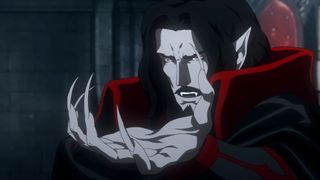 The Castlevania season 3 release date is set: you can pick back up with Trevor Belmont and his vampire-slaying pals on March 5. Netflix confirmed the date the animated series will resume on its official sci-fi focused Twitter account, NX, and series director Samuel Deats jumped in to further celebrate the with the season 3 poster that he designed and illustrated himself. How many directors of new Netflix shows also draw their own posters? That's rad.

Castlevania Season 3 is coming back March 5th!! We've been working our butts off on it and I can't wait for y'all to check it out!!(Hope y'all enjoy the official poster art for season 3! I've somehow kept up the tradition of squeezing in time to do it for this season, too.) https://t.co/qcmMgj5CqaFebruary 4, 2020

The poster is portentous (and metal) as hell, all full of chains and thorny vines and glowering eyeballs. It should have enough details and meaningful looks to keep fans sussing out details until the Castlevania season 3 release date arrives.

The Netflix Castlevania series is a loose adaptation of Castlevania 3: Dracula's Curse. The first season, which was only four episodes long, debuted in July 2017 and the second followed with 8 episodes in October 2018. The third season will be composed of 10 episodes, which almost puts it outside of "binge the entire thing in one marathon session" territory. Almost.

The animated series is the most exciting thing to happen for Castlevania fans in a long time. That said, if you're craving more monster-whipping action and don't mind swapping to a different fictional universe, you could give Bloodstained: Ritual of the Night a try - it's the latest game from former Castlevania series producer Koji Igarashi, and it has some serious Symphony of the Night vibes. It's even free on Xbox Game Pass for both Xbox and PC.

Check out the other side of the game adaptation coin with our list of the best video game movies of all time.