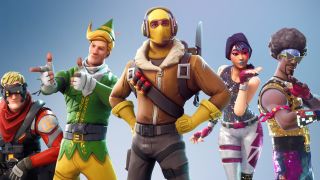 Imagine you’re playing squads in Fortnite Battle Royale with three other friends, having emerged from Tilted Towers unscathed after an intense firefight (not a realistic image, I know, but just roll with me here). You make it to Shifty Shafts and spot another team of four enemies, all wearing the dreaded ‘John Wick’ skin, as The Reaper outfit is more colloquially known among Fortnite fans.

Immediately, you begin to tense up a little. Four players all wearing the same, high-tier costume? Something tells you they’re not first timers. Even the thought of their predicted fighting prowess makes you a little more nervous, a little less on your game than usual, but your teammates go in for the kill anyway.

The attack descends into a chaotic game of cat and mouse within the mines. You land two shotgun hits on an enemy, leaving them with very little health, and let your teammates know that the John Wick is nearly dead. “Which John Wick?”, asks all three of your confused partners unison.

Ah, that’s why they’re running around as a bunch of Keanu Reeves look alikes. It’s a legitimate tactic that makes the common practice of spotting and calling out enemies more challenging than ever for would-be opponents, as distinguishing their individual locations and statuses apart from each other isn’t so simple when they all look exactly the same.

Fortnite players have complained about this doppelganger trick employed by squads in the past, and it’s just one of the many small discrepancies that nevertheless add up to somewhat undermine Epic’s claim that the game’s microtransactions are “cosmetic only and grant no competitive advantages” during matches of the popular last-person-standing PvP mode. In and of themselves, yes, these items are mere fashionable accoutrements with no gameplay value, but when players get creative in how they use them, this black and white distinction becomes a little too hazy.

For one thing, Fortnite’s assortment of purchasable skins are intended to offer visual distinction and nothing more, but the problem is that visual cues are a key part of Battle Royale’s gameplay dynamics. For instance, players have argued that camo-themed outfits like Elite Agent are harder to detect in forest areas, while in-game female models are generally skinnier than their male counterparts, making it easier to hide and find cover when using one of their skins. On the opposite end, certain costumes are rubbish for staying low in common hiding spots like bushes, since their brighter colours or larger head sizes will often make you stick out like a sore thumb, easy to spot for passing players.

Meanwhile, glowing, fluorescent costumes like the Skull Trooper or Dark Voyager skins are more noticeable from a distance and within the storm, which brings a discrete tactical disadvantage to those wearing them. Hell, one player even managed to use the Valentine’s Day’s Cupid skin to hide in plain sight as a graveyard statue, before completely surprising a (admittedly very naive) player with some well timed gunshots to the head.

Emotes can also be exploited for competitive utility beyond their primary use as an outlet for player expression. Using the Dab and Flippin’ Sexy emotes as a way to taunt players or outright dodge their attacks is a well documented occurrence in Fortnite Battle Royale, and continues to be a genuine maneuver deployed by the more experienced players during fights. You might argue that it’s just as easy, if not easier, to evade bullets simply by jumping around normally, but it’s not as simple as that.

Take Flippin’ Sexy, which specifically works as a combat tool because of its effectiveness at disorienting enemies. You can cancel the emote any time during its animation, for example, allowing its users to flip off surfaces and surprise their foes by firing mid-air before they’ve landed. It’s not easy to pull off, but when executed well, it becomes more than a harmless emote, but a viable trick that offers clear tactical advantages against more traditional styles of play.

And then there’s the psychological aspect of it all. It’s a well known joke amongst the Fortnite community that less experienced players would freak out whenever they saw a player wearing The Reaper skin during Season 3. This was a signifier of someone with a lot of games under their belt, since The Reaper could only be worn by those who had unlocked all 100 tiers in Season 3’s Battle Pass. Battling these combatants with that foreknowledge of what their outfit represents often has a destabilising effect on one’s confidence and subsequent fighting ability, creating a vicious self fulfilling prophecy in which you lose to a John Wick partly because you were spooked by the costume, not the other way around.

Of course, some players may alternatively be able to focus and perform better when they know their opponent is likely an adept fighter, so the fear factor advantage that comes with wearing high-level skins like The Reaper are not guaranteed. If all this sounds rather implausible to you, let me try and phrase it another way; if you somehow found yourself in the boxing ring with Muhammad Ali, would you give it your best shot, or be too nervous and sweaty to even pick up the gloves? I know for a fact that I would be in the latter camp, and it’s no different for me and many others in the case of Fortnite.

So far, none of these minor byproducts of the microtransaction economy have really been a problem for Epic Games. The beauty of Fortnite is is that it’s often fun even if you’re losing, and you’re probably going to be too impressed by a dance-aided win to ever rage against its implications for competitive balance. But a competitive mode has been promised for Fortnite Battle Royale in the future, and you can be damn sure it’s going to encourage the kind of unpredictable plays that emotes and outfits have already been a part of so far, pushing the boundaries of what does and doesn’t offer a gameplay advantage.

One the one hand, it’s always a joy for both developers and the community at large when players discover new ways to improvise with the systems at their disposal, demonstrating styles of play that I’m sure Epic hadn’t even realised was possible when creating emotes like Flippin’ Sexy. And it wouldn’t be fair to punish that player creativity, even if these seemingly innocuous cosmetics are sometimes being bought and paid for with the express purpose of using them in combat.

But we all know how bad it can feel when a game becomes pay-to-win (just ask Star Wars Battlefront 2), and while Fortnite is nowhere close to earning that label yet, Epic may find it difficult to keep toeing that fine line between competitive balance and individual freedom as the game continues to evolve.

Right now, the examples of cosmetics subtly aiding gameplay aren’t so much a burning issue as they are a curious byproduct of the community’s constantly impressive inventiveness in Battle Royale which continues into Fortnite Season 4. But if it ever gets to the stage where one player loses to another in a final stages of a competitive match because they owned the more expensive, combat efficient emote, then the studio may need to think more carefully about the impact of its free-to-play economy.