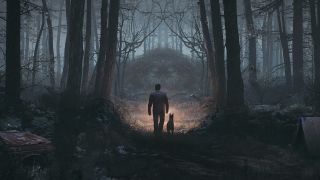 Bloober Team's Blair Witch game is coming to PS4 in December, four months after its release on Xbox One and PC. According to the official press release, the game will drop with some "gameplay and technical enhancements" as well as a canine customization pack for Bullet appropriately called the "Good Boy Pack." The pack includes dog skins, more in-game cellphone games, wallpapers, and animations for Bullet to make him more realistic. Blair Witch will be available on the PlayStation store for $30 on December 3. Xbox One and PC players can purchase this pack in their respective stores starting the same day.

Blair Witch throws you right into the Black Hills Forest and into the mind of a former police officer named Ellis. The game tasks you with navigating both the terrifying, labyrinthine woods and the traumatic echoes of Ellis' past in an attempt to find a boy who disappeared in the area. Lucky for you, you play the entire game with a good dog named Bullet by your side, which can help when the game gets especially scary. It's made by the same team behind the excellent Layers of Fear, and it certainly does the psychological horror parts right.

However, it's important to note the "gameplay and technical enhancements" that are dropping in the PS4 release. I reviewed Blair Witch on Xbox One back in August and the gameplay was plagued with bugs and glitches, one of which prevented me from completing the game (you can read the full review here). There was also a serious issue with Bullet's mechanics, which will hopefully be fixed in the PS4 version considering there's an emphasis on his animations. I did not play the game after any patches were released due to time constraints, but firmly believe it would be greatly improved with just a few bug fixes.

These Black Friday game deals are far from scary, and we're updating them on the regular.