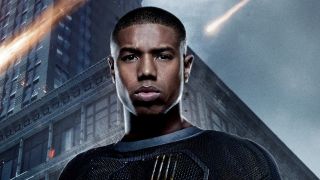 Now that Captain America: Civil War has introduced audiences to Black Panther, the Wakandan prince known as T'Challa, casting announcements are starting to roll in. Yesterday we learned that The Force Awakens' Lupita Nyong'o is ironing out a deal to play a potential love interest - yeah, let's hope she gets something more to do than fawn over Chadwick Boseman - and today brings word of another actor joining the cast.

THR reports that Michael B. Jordan has now signed on to appear in the movie. It's not confirmed yet but word is that he's in negotiations for a juicy villainous role. That'll be a departure for Jordan, who normally plays likeable good guys, and therefore something to for us all to look forward to. Well, if you weren't already excited to see more of Boseman's bad-assery.

The movie will mark Jordan's third collaboration with director Ryan Coogler after Fruitvale Station and Creed. It's also his second comic book movie after last year's uber-flop, Fantastic Four, which is apparently still getting a sequel, and third superhero movie following Chronicle.

With plot details currently under wraps, we're just gonna go ahead and assume that the movie will deal with T'Challa's transition from Prince to King after the events of Civil War. Shooting is due to start in early 2017 so hopefully there'll be an official synopsis revealed around that time.

Directed by Ryan Coogler and starring Chadwick Boseman, Lupita Nyong'o and Michael B. Jordan, Black Panther is released in UK cinemas on February 9, 2018 before opening in US theatres on February 16, 2018.