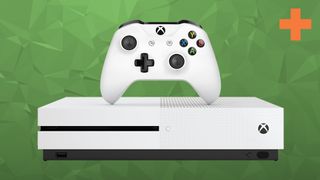 If you're on the lookout for the best Xbox One S bundles, prices and deals, this is the place to be; our team of bargain hunters have searched high and low to bring you every great offer they could find. You've chosen a great time to invest, by the way. With the next-gen Xbox Project Scarlett launching sometime in late 2020, the cost of an Xbox One S is likely to go down between now and then. In the meantime, you've also got six years of games to enjoy (especially if you sign up to Xbox Game Pass, a Netflix-style subscription service for games).

But hang on - isn't there another kind of Xbox One? The answer is 'yes', but it's not as confusing as you might think. Xbox One X deals are a premium option with more features and a higher price tag to go with them. Meanwhile, the best Xbox One S bundles are affordable, entry-level machines. More specifically, the S model isn't as powerful and won't display games in 4K resolution. However, it can still play all the same Xbox One games nonetheless. It's got a few tricks of its own, too. Much like the X, the S model boasts High Dynamic Range for better visuals, Premium Dolby Atmos audio, and the ability to run 4K Blu-Ray discs. Want a cheap, no-fuss console to play the latest games and movies on? The Xbox One S is for you (particularly if you're keen on saving money - even if you were tempted to wait for the next generation of consoles next year, there's no way the Xbox Project Scarlett price will be as low as this).

Happily, that leaves you with more cash in your pocket for must-have Xbox One accessories like Xbox Live, Xbox One external hard drives, and the best Xbox One headsets. Don't forget about cheap Xbox game deals, either. They'll help you get your hands on everything from Borderlands 3 to The Outer Worlds at the lowest price.

1TB Xbox One S + Battlefield 5 | £219.48 on Amazon
Head back into the thick of WWII with the latest instalment of the Battlefield franchise.View Deal

1TB Xbox One S All-Digital Edition + 3 months Xbox Live Gold| $209 at Currys/PC World (save £8)
Another digital-only Xbox One deal, this time with 3 months of online multiplayer as well.View Deal

Would you prefer to get the Xbox One S console separately? You're in the right place. This part of the page is updated on a daily basis with new savings and bargains. You'll find these below.