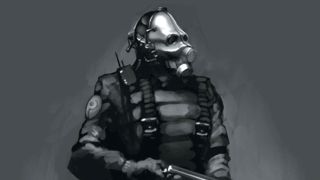 Call me a sucker for the classics, but I love a dank, dilapidated corridor, and Battlefield 1's "They Shall Not Pass" expansion looks like it will deliver. EA shared a bunch of new details about the game's upcoming first paid expansion including screenshots of all four new maps, and Fort Vaux immediately jumped out at me.

The map is focused on claustrophobic infantry combat where any corner could hide a squad full of your blood-hungry opposition. The semi-subterranean map is somewhat of a departure for the multiplayer series that generally focuses on outdoor playgrounds of destruction. But what immediately piqued my interest were the visual cues it shares with one of my favorite shooter stages of all time.

I don't know if it was intentional or not - there are only so many ways to portray an old, half-destroyed facility - but the Fort Vaux image instantly reminded me of Nova Prospekt in Half-Life 2. The sparse, cool lights, the smooth concrete walls and jagged rebar, the questions of "what was this space like before it became a shooter arena" raised by little signs of life. If you ever played Half-Life 2: Deathmatch back in the day, you know Nova Prospekt was one of its most tense, exciting maps, so all that can definitely work for multiplayer too.

The other levels seem more like typical Battlefield 1 fare, y'know… burning woods, quaint little villages waiting to be crushed by heavy armor, a beautiful field of poppies on busted old military equipment. Well, maybe not that last one.

You can start your French tour of duty when Battlefield 1: They Shall Not Pass is released in March 2017.