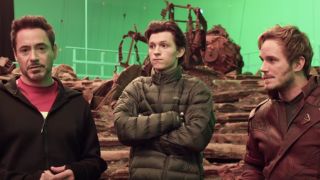 Avengers: Infinity War is said to have more than 60 characters up its impressively-financed sleeves, and a scene in which more than 30 are active and present at the same time. But surely we can't just follow a superhero superteam for an entire film, right? That's why heroes will be getting sectioned off, partnering up with allies old and new - and MCU boss Kevin Feige says some of these team-ups will be ones we've never seen before.

Variety caught up with Feige at the Spider-Man: Homecoming premiere and asked what could be shared about the next Avengers movie. "Not much. But Spider-Man will be there," Feige said. "We’re filming in Atlanta right now. It’s going very well. It’s going very well and every day there are shots, there are images, there are pairing of characters you’ve never seen before on-screen that, again, I’m very lucky to do what I do. I’m very thankful to do what I do."

Feige said that he considers "every single scene" in Infinity War to be "a geek out moment," so hopefully whatever these pairings are, they'll give fans the same kind of excitement when they watch the movie.

Not everyone's getting a shakeup of course. For example, we know that The Avengers will be sticking with their original lineup. Our beloved heroes will need to be careful though - Feige has confirmed Infinity War is the end of the road for some MCU regulars.