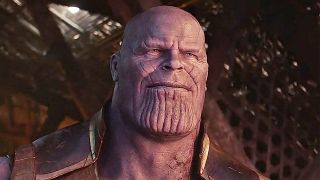 Avengers: Infinity War was dominated by Thanos – but the Mad Titan could have been featured even more heavily. The movie’s writers, Christopher Markus and Stephen McFeely, have detailed their original plans to include a Thanos origin story and why it ended up being cut.

“We wrote some scenes… of a young Thanos on Titan trying to make his case [about culling the population],” Markus told Backstory Magazine (H/T ComicBook.com)

Infinity War did decide to give us a glimpse into an earlier version of Thanos but, by the time we saw him ‘rescuing’ Gamora on her home planet, he was very much the genocidal, widely-feared despot that eventually snapped away half the universe. The original plans for a Thanos origin story, including Josh Brolin’s character appealing to his senate and trying to pitch his schemes, ended up being cast aside in later drafts.

Why was a peek into Thanos’ early years scrapped? It was, as ever with the Mad Titan, a case of balance. “It was the sort of thing you could imply without having to see,” Markus explained. Markus also made a reference to his belief that the Mad Titan’s actions mirrored too much that of another superhero origin: Superman’s father, Jor-El, on a dying Krypton.

For McFeely, the scrapped origin is “a scene that’s only doing one thing. What we settled on were all those scenes that explained any history he had with Gamora. Those are doing more than one thing, because they’re highlighting his relationship with the daughter he’s going to have to sacrifice.”

Thanos may not have had his background fleshed out in Infinity War, but that’s not to say it’s off the table entirely. The Eternals is on the horizon who, as the comics reveal, can count Thanos among their ranks. A Marvel Phase 4 Thanos comeback would be quite something.

Want to see what else was left on the cutting room floor in the MCU? Here are details of all six Avengers: Endgame deleted scenes you need to know about.