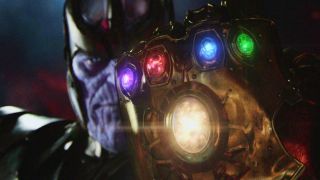 They say bigger isn't necessarily better, but what do "they" know anyway? According to a report from the Atlanta Business Chronicle, Avengers: Infinity War and its sequel (which, reminder, is no longer called "Avengers: Infinity War Part 2" and currently lacks an official title) have a staggering $1 billion budget spread between them.

Here's the deal: Infinity War is currently shooting in the UK, where Pinewood Studios is based. Pinewood Studios has served as the studio for previous Marvel Cinematic Universe films and is likely helping out on Infinity War as well. Pinewood Atlanta Studios co-owner Dan Cathy proudly announced at the African American Film Critics Association luncheon on Feb. 28 that the studio was currently hosting "the largest film production ever, with a $1 billion budget."
Yeah, it doesn't take Tony Stark to put this puzzle together.

Assuming that Cathy was correct and not just being hyperbolic, and assuming that $1 billion is spread evenly across Infinity War and Avengers 4, this is a monumental expense. For reference, Age of Ultron cost approximately $280 million. This theoretical $500 million budget dwarfs not only that, but even beats out Pirates of the Caribbean: On Stranger Tides' $378.5 million budget for honor of most expensive movie ever made.

Of course, On Stranger Tides didn't have to account for paying Robert Downey Jr. That would explain a lot.