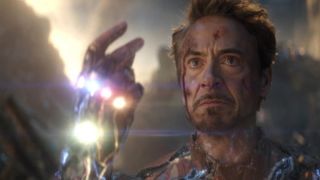 A new Avengers: Endgame deleted scene is now available to watch on Disney Plus. Tony Stark (Robert Downey Jr.) gets one final goodbye with a now grown-up Morgan (played by Katherine Langford, who never featured in the final cut) in the Soul World. Stark even pulls out “I love you 3000” once more. D’aww. **Spoilers for Endgame ahead**

Here, Tony – presumably after his own version of The Snap outside of Avengers HQ – is whisked away to the Soul World and meets Morgan, who he doesn’t recognise at first. She says she “got to live [and] grow up” and she’s glad they got to spend as much time together as they did. Tony, though, thinks he’s made a mistake and begins to doubt his decision but his daughter replies, telling him: “I’m proud of you.”

The tear-jerking kicker comes at the very end, however. Morgan kisses her father on the cheek and says “I love you.” In response, Tony leans in close and whispers “I love you 3000” in her ear as the scene ends.

It’s a nice epilogue for Tony Stark and a hint at what possibly is still to come for Katherine Langford’s Morgan – but you can see why it was cut. After Tony’s original farewell, this feels unnecessary in what was already a three-hour film.

To actually access the I love you 3000 redux, you’ll need to click through to ‘Extras’ on the Avengers: Endgame page, then click on ‘Deleted scene: Tony at the Way Station.’ It’s also available with commentary from directors Joe and Anthony Russo.

While you’re here, why not check out the best movies on Disney Plus. You can sign up to Disney Plus here, complete with a seven-day trial.