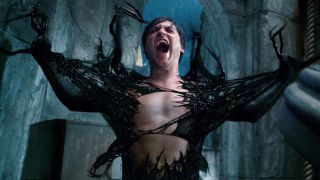 While Marvel and Disney continue to expand the MCU with movies like Spider-Man: Homecoming and its planned sequels, Sony has been busy prepping its own "Marvel Universe" - including Venom and a Black Cat / Silver Sable team-up. Previously, MCU head honcho Kevin Feige said these spin-offs were most definitely not tied to the MCU. But this weekend Homecoming producer (and former Sony boss) Amy Pascal gave a somewhat conflicting report.

Speaking to German outlet Filmstarts, Pascal says that the Sony spin-offs "take place in the world that we’re now creating for Peter Parker. I mean, they’ll be adjuncts to it, there may be different locations, but it will still all be in the same world and they will be connected to each other." Juuuust in case you missed the implication there, Filmstarts asked if Tom Holland could show up in Sony's films. "There's a chance! There's always a chance," Pascal responded.

While I can't deny the excitement I feel over picturing Tom Holland as Spider-Man fighting Tom Hardy as Venom, I get the sense Pascal is reaching a bit too far here. Feige seems incredibly tense as Pascal gives her answer, as many have pointed out on Twitter.

He tried so hard not to make this face pic.twitter.com/dAYH93QSEvJune 18, 2017

Feige also previously stated that, while not out of the question, it would be highly unlikely for Disney and Marvel to be associated with an R-rated film - which Venom is reportedly aiming for.

If I was a cynical man, I might think Pascal is trying to drum up excitement for Sony's films (for which she serves as a producer), hoping to ride the wave of the highly-anticipated Homecoming. If I was an optimist, I'd say maybe these corporations are still negotiating character rights so that we can get a quality Spider-Man vs Venom moment. If I was a pragmatist, I'd say the truth probably lies somewhere in the middle, and that the best we can hope for is a Tom Holland cameo - not a full-fledged performance. Whether I'm right or wrong on all counts though, this will be interesting to watch.

It won't be long until we get a clearer picture of how this will all work: despite years of development hell, Venom is slated for October 2018.