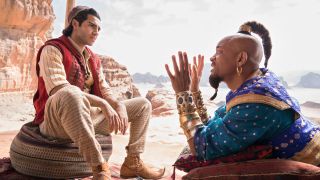 Thought the idea of an Aladdin sequel was wishful thinking? Think again. The billion-dollar live-action hit is being primed for an original follow-up according to a new report.

The Hollywood Reporter let the genie out of the bottle, all but confirming that Disney are working on Aladdin 2. Not only is Guy Ritchie set to return as director, but a writers’ room has been working on new ideas for the sequel by reading through stories from One Thousand and One Nights, the source material upon which the original Aladdin was loosely based.

That means any Aladdin sequel, which is being penned by Real Steel’s John Gatins and Straight Outta Compton’s Andrea Berloff, is unlikely to take its cue from the direct-to-video Return of Jafar, which followed on from the original 1992 animated smash hit starring Robin Williams.

At this early stage, the cast haven’t been confirmed, though Mena Massoud, Naomi Scott, and Will Smith are "expected to reprise their roles."

That might not be the only visit to the world of Aladdin. A Disney Plus spin-off, starring Billy Magnussen’s Prince Anders, is also on the way (via Variety).

Remarkably, Aladdin 2 will be just Disney’s third live-action remake sequel this century, with 102 Dalmatians and Alice Through the Looking Glass preceding it.

While most retellings are one-and-done, Disney using the platform of live-action remakes to help craft fresher stories is a welcome change. Re-treads and re-imaginings are all well and good, but it’s when the House of Mouse gets to sprinkle some of its original magic that it thrives like no other.

Find out what else is to come from the studio with our look at the new Disney movies releasing over the next few years.