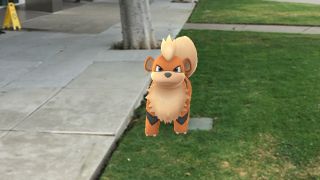 The game has got its fans doing whatever it takes to nab their favorite adorable creatures. And given the peculiar places that they might show up, that means doing some decidedly weird things. So if you notice any of these changes in your loved ones, don't fret. They're probably just trailing an Eevee.

“Did you need something from the shop? Or the mall across town? Or... Montana?”

2. Their willingness to walk into traffic has increased dramatically.

Please don’t do this. There will be other zubats, we promise.

3. They disappear at odd hours.

Don’t worry, they’re not having an affair. They’re just checking the alley behind the house for weedles.

4. They’ve stopped checking Facebook, answering texts, and streaming music because they need to save their battery.

5. You can hear squeals of delight coming from odd places in the house.

Look, we all enjoy a good visit to the bathroom, but cries of “Aw, yeah, I DID IT!” are highly suspect.

6. You see six people staring at their phones in a semi-circle outside the same library in the middle of the night but making no motion to go into the library.

Guys. You’re all playing the same game. At least all say hello. And stop freaking everyone out at the library. Wait, why was I at the library in the middle of the night? No reason, shut, up, don’t worry about it I wasn’t looking for Ghastly.

7. Young man and woman run face first into each other in the middle of a grocery store, phones held out in front like some kind of horrifying 21st century jouster.

This is not the 2016 equivalent of planking or the ice bucket challenge. These are two people chasing a Butterfree into the dairy aisle.

8. Walk into a concert hall and see one of those pay charging stations literally overflowing with phones tethered together.

Evening revelers are not obsessed with getting a blurry 30 seconds of Death Cab For Cutie covering LCD Soundsystem. They are all prepping to have full batteries when Meowth appears on the amp stacks.