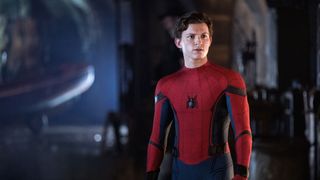 When news emerged that Spider-Man could be leaving the Marvel Cinematic Universe, fans banded together to call on Disney and Sony to come to sort of resolution. Surely, Tom Holland's web-slinger couldn't just leave the Avengers?

Soon enough, the two mega-companies came to an agreement that meant Spider-Man could stay in the MCU. While we'll never know the intricacies of those discussions, it looks like Holland played an integral part.

Speaking to Jimmy Kimmel on his late-night show, Holland revealed he was three pints down at a pub when Sony CEO Bob Iger called and asked him his thoughts on brokering a deal with Marvel.

"My family and I went to the pub quiz in our local town, and I’m like three pints in, haven’t eaten much and I get a phone call from an unknown number and I have a feeling, I’m like, ‘I think this is Bob Iger… but I’m drunk,’" Holland told the talk-show host. "So my dad’s like, ‘Just take the call, you’ll do fine!'"

Holland continued: “I basically just said, ‘Thank you for the opportunity,’ and he said, ‘There is a world in which we can make this work’ and then there were a bunch of phone calls back and forth.”

Kimmel pointed out that Iger previously said Holland had cried on the phone, which the actor corrected. “I weeped," he said. "No, I didn’t weep — I did, yeah. Yeah, no, I was really emotional because I felt like it was all coming to an end... We had a really good plan with what we were going to do with Sony, the future of Spider-Man was still really bright, but it would’ve been a shame to take him out of the MCU, because that's where he belongs.” Watch the full interview below.

There you have it: a drunk, weeping Tom Holland helped keep Spider-Man in the MCU. Speaking of which, the web-head's third movie will make up part of the forthcoming Marvel Phase 4, which will begin with Black Widow next year.

Need more Spidey in your life? Here are all the best Spider-Man movies, ranked!