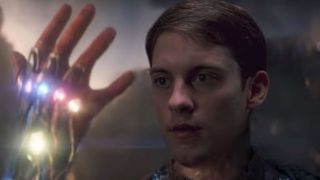 Ever wanted to see Thanos go head to head with Sam Raimi’s Spider-Man in Avengers: Endgame? Of course you have. Thanks to an ongoing series of fan-made videos, in which Tobey Maguire has been digitally added into the MCU, that’s now a reality. It only gets weirder, too, the more you fall down this incredibly specific, bizarre rabbit hole. Here’s five words that will help whet your appetite: Emo Peter Parker in Homecoming.

These creations are all from the weird and wonderful mind of YouTube channel Tobey in the MCU. As you can imagine, it does what it says on the tin – but it’s delivered in such a way that you can’t help but laugh out loud at the ways Tobey Maguire is shoehorned into the scenes.

Case in point: this impromptu pizza delivery. Vision and Scarlet Witch’s light flirting is immediately overawed by the charisma of both Tobey fumbling through some mops in the background and then immediately turning up with a stack of pizzas after Vision mentioned it might be a good idea to get takeout. Have a look for yourself:

The hits just keep coming. Everything you could hope and wish for is here. Tobey Maguire in the ‘I am inevitable’ scene? Check. Black Suit Spider-Man talking smack to Tony Stark in Captain America: Civil War? Yeah, why not. A GamesRadar article plastered over the Daily Bugle in a scene involving Willem Dafoe’s Norman Osborn? Remarkably, that’s a thing.

Plus, the piece de resistance: Tom Holland hiding from a swaggering Emo Peter Parker, who is strutting his stuff in Spider-Man: Homecoming.

It’s impossible to put into words how incredibly surreal it is, so it’s best to go and check out all 25 for yourself in this YouTube playlist. You can thank us later.

For more from Tobey (and the MCU), check out the best superhero movies ever.