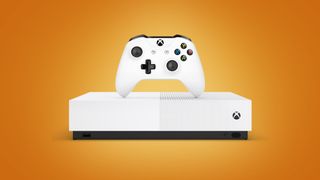 Walmart's excellent gaming deals are at it again with the return of one of our favorite cheap Xbox One bundles. The disc drive-less Xbox One S All-Digital console has been slashed back to its Black Friday price of $149.

That's a saving of $50, and pretty awesome value considering the fact that it comes with Minecraft, Sea of Thieves, and Fortnite DLC (2000 V-bucks and the Legendary Rogue Spider Knight Outfit). This offer arrives just in time for Christmas, and it's a great gift option for anyone who wants to try out Xbox games on the cheap or has been thinking about picking up a console for their kids.

If you pick up a cheap Xbox Game Pass membership too, you'll be spoilt for choice well into 2020. Seriously - gaming's answer to Netflix comes with over 100 games, including The Outer Worlds, Rage 2, and every Xbox One exclusive. Although this cheap Xbox One deal doesn't feature a disc drive for Blu-rays/physical games, the existence of Game Pass makes it worth considering. Particularly if you can get Ultimate Xbox Game Pass, an Xbox Live deal that includes online multiplayer with your subscription.

Xbox One S All-Digital (1TB) + Sea of Thieves + Minecraft + Fortnite (2000 V-bucks & outfit) | $149 at Walmart (save $50)
This is a great choice for those who want an entry-level console without the clutter of discs. It's also good for kids, as it has three included games they're sure to love. It's the cheapest price you're likely to see this side of Christmas.
View Deal

Yes, it's reasonable to wonder whether this cheap Xbox One deal is worth it when a new Xbox is coming in just 12 months or so. And while we may have gotten our first like at the Xbox Series X console earlier this week at The Game Awards, that's not to say we should sit on our hands until it's released. To begin with, it's not going to land before late 2020. Secondly, the Xbox Series X price is guaranteed to be much, much higher than this - $149 is dangerously close to an impulse buy, especially because it'd make a great Christmas gift for yourself or a loved one.