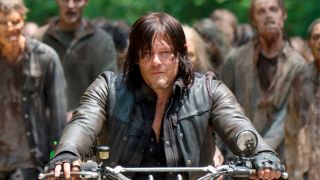 Co-executive producer Denise Huth spoke to Entertainment Weekly regarding the season 8 premiere, coincidentally its 100th episode. Is 100 not out a good omen for The Walking Dead to come back swinging? Huth thinks so, “[I]t makes it a really exciting way to come back. The energy here is really good. Everybody is super-pumped up and it’s particularly exciting coming off of last year where the season premiere last year was a total 180 energy-wise. It was really tough way to start the season and this year is a really exciting way to start.”

It certainly sounds like down in the dumps characters will make way for all out war. Let’s hope it proves to be that simple, as Huth provides a teasing glimpse at what the opening episode will have in store for us when it hits later this year: “It’s a ton of action. It’s super exciting. I think it will be really, really satisfying.”