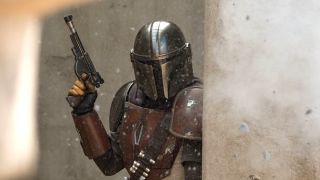 The official Star Wars Twitter account shared a series of concept art images from Chapter 2 of The Mandalorian, and the internet is (still) going bonkers over Baby Yoda. Not that we blame them one bit - Baby Yoda is pretty stinkin' cute - but even concept art utterly void of "the Child" is impressive in the way it captures the distinctly Star Warsian tone captured by The Mandalorian.

The official concept art, which closely resembles the actual scenes from Chapter 2 of The Mandalorian, is credited to six different artists: Jama Jurabaev, Doug Chiang, John Park, Christian Alzmann, Ryan Church, and Nick Gindraux. Some of the images are joint efforts by two artists, while others are the work of a single artist.

Some of the subjects featured in the dynamic concept art include the prehistoric-looking 'Mudhorn,' which was introduced in The Mandalorian's second episode, The Mandalorian sitting across from the "I have spoken" guy inside a cave, and of course, adorable Baby Yoda looking over the shoulder of our titular hero.

We're still only two episodes into the new Disney Plus series, with episode 3 of The Mandalorian going live on Friday, but Jon Favreau has already shared the first shot of season 2. The shot isn't anything revolutionary, but it's a nice reminder that season 2 isn't too "far, far away."

Catch up on The Mandalorian and prepare for season 2 with a new TV set, and save a bundle in the process with our guide to the best Black Friday TV deals.