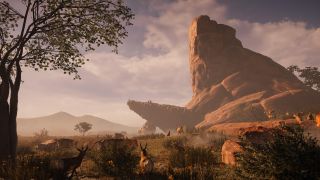 When you see this image you'd be forgiven for thinking it was just a still from the new remake of The Lion King, but it was created entirely in Far Cry 5 by a Scottish worldbuilder with next-level skills. Here's the video on how he did it.

"I wanted all the animals to run towards the rock but when I pressed play they did whatever they wanted," explained Mojo Swoptops, also known as Duncs, on Reddit. So, I made a tunnel structure behind the camera, filled it with animals, then at the back of the tunnel one lion. When I pressed play, all the animals ran out of the tunnel to escape the lion to create the illusion of them all running towards the rock."

"I also tried placing eagles to give some more variety in the wildlife but they kept attacking my deer and flying off with them."

If you're allergic to cats, then you can also admire his work recreating the Dunder Mifflin set from The Office

Honestly you can lose yourself for hours in Mojo Swoptops’ YouTube channel, there's iconic movie locations like Scarface's mansion, historic buildings like the Taj Mahal, and more Disney goodness like Andy's House from Toy Story.

My personal favorite - because it's one of the sacred texts of the eighties child - is this scene from Labyrinth. I can almost hear the Goblin King adjusting his leggings.