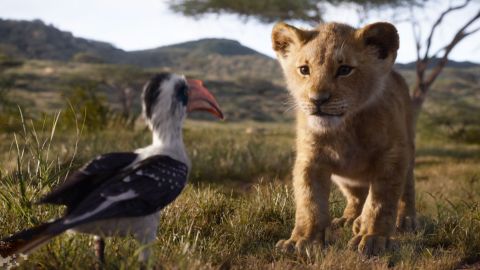 The ’toon still rules when it comes to heart, but this shot-for-shot remake is an impressively mounted, visually breathtaking nostalgia rush.

Whether or not you consider them necessary, there’s no denying that the market for Disney’s nostalgic live-action redos is huge: The Jungle Book, Aladdin and Beauty And The Beast combined have taken more than $3bn at the box office. The Lion King is the latest, and although it isn’t really live action at all, its CGI visuals are so photorealistic it might as well be.

The 1994 Lion King is one of the most beloved of the new(ish) Disney classics, and here director Jon Favreau gives it the same treatment he gave The Jungle Book (although that film featured young Neel Sethi as Mowgli – The Lion King features no living beings on screen). Photoreal characters are stunningly rendered in a remake that very closely follows the template of the original. It makes for a bizarre viewing experience, as there’s the inescapable feeling that you’ve already seen it, even if there’s delight to be had seeing your favourites come to ‘life’.

Musical cues, identically recreated iconic shots and largely repeated dialogue hit the nostalgia buttons for a pretty involuntary rush of feels for viewers familiar with the original. It’s hardly necessary to restate the plot: lion prince Simba (JD McCrary, and later Donald Glover) is nervous about following in the oversized pawprints of his father/king Mufasa (James Earl Jones, reprising his role with commanding authority). The big moments of the ’toon provide the set-piece peaks here: from the opening ceremony at Pride Rock to that valley of stampeding wildebeest, the key scenes are recreated in frequently jaw-dropping fashion.

The fact the story holds no surprises for anyone who has seen the original means that you can just gawp at the visuals, which almost feels like the point. It’s a remarkable step forward in animation terms. The lighting (especially the burnished sunsets), is incredible. You might occasionally find yourself remembering that the animals are animated, but it’s almost impossible to convince your brain that the backgrounds aren’t real.

Besides the fact they can talk, the animal cast are mostly restricted by their real-world physicality, including minimal facial expressions. It can sometimes make certain scenes (particularly musical numbers) feel a little muted, as the performers are only afforded minor mouth movements to sell their emotions. Any more might have broken the realism, but arguably would’ve added to the investment, particularly for newcomers. (In a parallel universe, it would be interesting to watch an alternate version of The Lion King that goes further in the realism stakes and ditches all the speaking and singing.)

In many ways, this Lion King is shot like a high-end nature documentary, whether it’s tracing a roaming beast running across a plain, or struggling to keep up with a twitchily urgent rodent. Most of the fun angles and zooms are reserved for warthog Pumbaa (Seth Rogen) and meerkat Timon (Billy Eichner), who have enormous fun taking the, ahem, lion’s share of the jokes. Simba’s future partner Nala (Shahadi Wright Joseph and later Beyoncé Knowles-Carter) has a little more to do this time, though Knowles-Carter proves more of an asset in the singing stakes (providing a new original song) than the dramatic. Chiwetel Ejiofor has the unenviable task of following Jeremy Irons as evil uncle Scar, but still manages to ooze classically trained menace.

There’s no denying the craft and care that’s gone into recreating childhood memories. It’s like a kid’s thought experiment (‘What would my favourite cartoon look like?’) lavished with a huge amount of care, attention and budget. But while the result is an astonishing spectacle, the hyperreal visuals sometimes feel like they’re in conflict with the Shakespearean drama and crowd-pleasing songs.

The ’toon still rules when it comes to heart, but this shot-for-shot remake is an impressively mounted, visually breathtaking nostalgia rush.