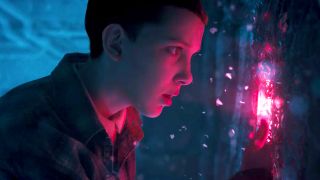 Warning: Spoilers for Stranger Things season one AND season two ahead. Read on at your own peril.

This week as part of MCM Comic Con, actress Millie Bobby Brown - who plays Eleven on the hit Netflix show Stranger Things - introduced a new clip of the upcoming second season showing her character finding her way out of The Upside Down. If you don't mind spoilers (and really, you shouldn't be reading this far if you do), you can watch the scene below:

Eleven is pretty central to the plot of Stranger Things. Not only is she the product of a secret government program that gave her psychic abilities, but that same program (and Eleven herself) also helped open a door to another dimension known as The Upside Down. It's from this dark place that the season one monster, the Demogorgon, came, and where a new threat now looms.

At the end of season one, Eleven's fate was left unknown. And while it's been clear that the character would be returning for season two, we didn't really know how she made her way back or where she was in the time between. Given that Eleven is wearing the same clothes she did when she defeated the Demogorgon and it takes place in the school, I'd wager this clip is indeed showing us her escape from The Upside Down. Hopefully this happens early on and she can get back with the gang quickly. In any case...

Just 10 more days. Ten more days until we can return to Hawkins, Indiana and get caught up with The AV Club and Eleven, our favorite paranormal-fighting band of misfits since The Losers Club.