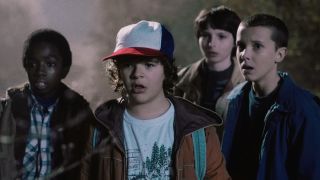 The first season of Stranger Things blends elements from the works of Spielberg, Carpenter, Dante, and King. From kids furiously pedalling bikes at dusk, to shady government figures, to (of course) hideous monsters. The 'Demogorgon', named by the three lead kids as a hat tip to Dungeons & Dragons, is a faceless beast that tears through the fabric of reality to kidnap defenseless mortals.

It's horrible. Equally as nasty are the early concept designs for the creature. On the show, the Demogorgon towers above its prey, its head opening like a really, really hungry Venus fly trap.

In the above gallery from the team at Aaron Sims Creative, posted by commissioned artist Nuttavut Baiphowongse, you can see the different ideas that were in play before they settled on the final design. They're not a million miles from what ended up onscreen, with the exception of an extended tail and one version that has the beast up on hind legs with tiny arms. It's like Bambi crossed with a T-rex hybridised with something Giger-esque.

The world it inhabits is referred to as 'the Upside Down', a parallel universe that lies beside ours. This dark and mote-filled land is really only investigated in the final episode, as Joyce and Hopper venture forward to find Will, so this additional gallery the ASC team posted is a lot of fun to trawl through. It gives a bit more depth to the Upside Down, which we know is pretty extensive as The Duffer Brothers who created the show have a 30-page document detailing every part of it.

Perhaps the best of all the goodies ASC revealed are a series of VFX breakdowns. I won't go into the specifics of each one - they're only about 10 seconds long - but there's definitely stuff in there that makes you see the Demogorgon in a new light. (Its entire face is covered in teeth!)