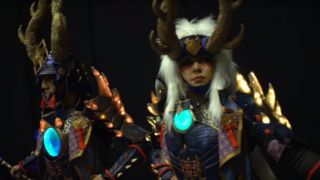 Cosplaying has produced some real marvels over the year, and Japan's annual World Cosplay Summit features some of the prolific community's best work. This year's event concluded last week and showcased stunning cosplayer duos from 40 different countries. The winners of the World Cosplay Summit, Australia's KCoz and A. K. Wirru, are currently dropping jaws with their magnificently intricate creations inspired by Monster Hunter World.

Team Australia's KCoz and A.K. Wirru stole the show, and the title of first place in the competition, for their dazzling Azure Starlord get-ups and weapons. And while there can only be one first place winner, there were plenty of other applause-worthy spectacles, such as Team Malaysia's Street Fighter showing, Team Mexico's Link/Zant double-threat from The Legend of Zelda: Twilight Princess, and my personal favorite: Indonesia's Soulcalibur duo.

It's also worth checking out this compilation video of each team's showing from the World Cosplay Summit, which includes captions for each cosplay's source material.

The World Cosplay Summit has been a gathering-place for the world's most enthusiastic cosplayers and their fans to celebrate the craft and represent countries from around the world since 2003. After two weeks of competition across two Japanese cities, this year's final round took place in Nagoya, Japan. The aforementioned Team Australia took first place in the competition, followed by the US and France in second and third. Special awards were also given to China, Chile, and Germany.

Here's who the staff of GamesRadar would cosplay as at work if given the opportunity.