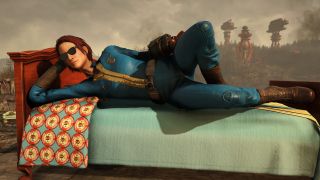 The modern office environment has come a long way since the simple days of Casual Friday, and now themed events are all the rage in the working world. Even if you're not a full on cosplayer by nature, it's fun to dress up every once in a while on a day that isn't Halloween and see what your coworkers managed to whip up. That got us thinking - who would we go as if our office suddenly had a "dress up like a games, movies, or TV character" day? We asked the GamesRadar+ team who'd they show up as, which may or may not reveal deep insights about their true nature. Some of the answers are practical, others less so - but they'd certainly be memorable if nothing else.

I could come up with any number of reasons about why I'd like to cosplay as One-Punch Man at work: he's so cool, he's so tough, I deeply identify with his desire to do all the shopping while there's a sale. Maybe it's because I've been going to the gym since July and I see Saitama as a fitness hero - 100 sit ups, 100 pushups, 100 squats, and running 10km every day until you can kill anything with a single punch. But mostly I'd want to cosplay as him because he's bald and I'm bald and that way I wouldn't have to buy a wig. Connor Sheridan

Let me give credit where it's due first, as this amazing idea comes straight from Sam Loveridge. It's genius. I have Atreus' arm tattoo as well as two more Icelandic tats, I'm smol, I've shot things with a bow more than a couple of times, and (most importantly) I really, really love God of War. Getting hold of a faux-fur tunic wouldn't be an issue, and it's not too hard to tie a leather thong (shut up, that's the proper name for a long string of leather) around my arm or to find a ragged long-sleeved grey top. No, what's would definitely require some cosplay wizardry would be getting an arrow quiver that's embossed with the same ornate designs as Atreus' later gear, and finding some luminescent white arrows. Maybe I could spray paint some wolves and train them to leap in front of me when I aim with my bow. Just to be extra authentic, y'know? Zoe Delahunty-Light

Ah, to have the talent and time needed for cosplay. I've been keen to give it a proper go after modifying a Spider-Man suit with puff-paint and special 3D lenses some time ago, but the tricky bit would be working out who to choose. There are some incredible Destiny costumes and props out there by the likes of Aurum Effects, for instance. How cool would it be to step into the literal shoes of your in-game Warlock, Hunter, or Titan? However, I'd probably settle on an outfit I've taken a crack at once before: a Fallout Vault Suit.

I love an excuse to go all in on Halloween dress-up, so a few Octobers ago we modified a blue jumpsuit with the iconic yellow strips, numbering, and real tire armor that weighed a ton (it also took me around 4 hours to saw up). This time I'd want to make my accessories from EVA foam, though. If you've not heard of it before, it's basically the matting you do yoga on. Coming in various sizes and thicknesses, it's dead easy to shape and paint. As an example, I made an OK-ish Fallout 3 belt from scratch last time (and if I can do it, anyone can). When it comes to everything else, there's no reason to be afraid of repurposing cheap toys. Prop machetes, Nerf guns, bullet belts, fake welding goggles, dress-up gas masks and more can be repainted and weathered to fit in with the post-apocalyptic aesthetic. Benjamin Abbott

It's a lot easier to go as someone you vaguely resemble when you do cosplay, so as soon as I spotted Kait in Gears of War 4, I knew I'd found my spirit animal. Not only does she have amazing hair (yes, I'm biased), but she's the kind of girl who's changing things - particularly the narrative in Gears 5. This might sound more like an impassioned campaign for more female leads in video games (although, can you blame me), but having a heroine take the reins for the next Gears of War title is seriously brave, as the series has thrived on its muscly men with guns vibe for years now. Plus, she's got an awesome look, is just as impressive as any of the other COGs, and was taught how to survive from birth. She's basically a badass, and my real-life squishy ass wants nothing more to emulate that. Sam Loveridge

What better way to lampoon the grinding gears of capitalism and a decades-long rat race than to go to work dressed up as the Orc forces' lowliest of laborers? Actually, I'm sure there are plenty, but I just want an excuse to endlessly quote the lovable losers who break their backs working throughout the Warcraft series. Imagine strolling into the office in green bodypaint and a tattered leotard, with a guttural "Ready to work" as you set about your daily tasks. Even if you're not mining gold or chopping lumber, the Peon's dialogue from Warcraft 3 can double as automated email replies, like "I can do that" and "Be happy to." And if someone attempts an HR violation on you, just reply with "Me not that kind of orc!" Lucas Sullivan

Allowed to go up to anyone and look at them until they give you treats, check! No judgement on the amount of naps you take in a day, check! A feeling of intense happiness every time someone throws a ball! Come on, being a dog for a day would be awesome, and if I'm cosplaying as a dog I'm fully embracing the role and ‘becoming Bolt.' Of course this means I'll also have a pretty successful TV career (with my co-star Miley Cyrus) and a hamster friend called Rhino who lives in a ball. What date are we all doing this? James Jarvis

Who would you dress up as to the amazement of your coworkers? Let us know on Twitter.