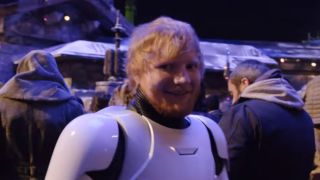 One month after its release and we’re still finding out more about Star Wars: The Rise of Skywalker. Case in point: a handful of blink-and-you-miss-it cameos have been officially revealed for the first time, including Ed Sheeran’s Star Wars character, and an appearance from legendary composer John Williams.

Oh My Disney has the lowdown on all of the hidden Rise of Skywalker cameos. Among the most eye-catching is Ed Sheeran, who appears as part of the Resistance. Didn’t spot him? There’s a reason for that – he’s covered in prosthetics and playing an alien.

Elsewhere, there’s finally some confirmation of John Williams – who has scored every single mainline Star Wars movie – showing up in Rise of Skywalker. He plays the bartender Oma Tres on Kijimi.

The third and final Rise of Skywalker cameo that you might not have clocked the first time round is a deep cut for music fans. The Stormtrooper, codenamed FN-2802, who corners Rey, Finn, and Poe on Pasaana is Radiohead producer Nigel Godrich.

But it’s not just famous faces who get their chance to have a walk-on bit – but it’s more like a fly-on part in this next case. The final battle on Exegol included over 14,000 ships according to Disney.

Numbers like that are perfect for those who want to comb through every frame when Rise of Skywalker gets a home release – but it’s made things slightly easier by pointing out Ghost, the ship from Star Wars Rebels, can be counted among them.