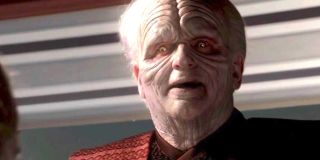 Star Wars: The Rise of Skywalker left fans with a great many questions – questions we here at GamesRadar+ tried our hardest to answer. One of those concerned how exactly the Emperor returned after plummeting down the Second Death Star to his own demise.

Palpatine's return is only vaguely alluded to in Episode 9. However, we can surmise that the huge machine the Emperor is attached to keeps him alive, and that he's using Dark Side powers to "cheat death". Now, thanks to the Star Wars: The Rise of Skywalker Visual Dictionary, we have more clues as to how the Sith Lord survived.

Remember those mysterious hooded followers? No, not the Knights of Ren, but the other evil Emperor followers, known as the Sith Eternal. Their apparent devotion to the Emperor brought them to Exegol, the Sith planet, where they used "technology and the occult" to bring their leader back to life.

The Visual Dictionary (via Movie Web) explains how they spent decades trying to bring back the Emperor, all while crafting the Final Order's huge fleet of Star Destroyers. These were, the book clarifies, not reused old ships, but brand-new Xyston-class Star Destroyers, manufactured by the "shipwrights, engineers, and slaves" held on Exegol. The parts for the ships were also smuggled to Exegol, hidden by the power of the Sith Eternal.

The crew of these ships are barely seen in Star Wars: The Rise of Skywalker, yet the book adds that they were mainly made of the children of the Sith Eternal, born and trained to serve the Final Order. These are also the soldiers under the red Sith Trooper armour.

That's about the gist of it. While there's no specific information on what liquid those test tubes were pumping into the Emperor, we have a slightly better idea of how he returned. No doubt, though, that we will find out more as LucasFilm begins to release more supplementary material about the Emperor's mysterious 30 years on Exegol.